Sitting in one of my many piles of things to share with you was the #2020 Collector Edition: #Volkswagen Sunagon. I received it a little ways back from another collector as these were available at the first (and only) Legends Tour event for 2020 — as well as it being a promotional car at some retailers internationally. Here in the United States, the Collector Editions — some refer to them as #Mail-ins — are promotional vehicles available through a specific retailer. In most cases, you do have to buy 20 Hot Wheels or spend $20 in Hot Wheels to get an eligible receipt to “mail-in” for the vehicle, but Walmart has been doing things a little differently in the last couple of years.

Until this whole COVID-19 pandemic hit, collectors were extremely excited for the #’55 Chevy Bel Air Gasser and the Hot Wheels iD: Bone Shaker that were set to be event exclusives for Legends. Since Walmart shifted from a mail-in program to spending $20 on Hot Wheels eligible product at the events, the only way for US collectors to get these #Walmart Exclusive #ZAMAC Collector Editions were to go to an event, spend $20, and spin a wheel at the vending truck outside for a chance at one. Sure, spending $20 for a chance at one is not worth taking in some collectors’ minds, but at least it got these out into the wild so more calculated collectors could at least pony-up on eBay for one. 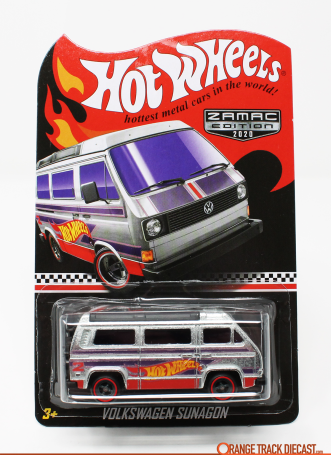 With everything in life currently in a giant holding pattern, these are bound to be released later on — either at Legends, if it’s not canceled for 2020, or somewhere else. I don’t know how many collectors of the #Volkswagen Sunagon there are out there, but this one is definitely a must-have if you collect the casting. Perhaps you fancy the #Walmart Exclusive #ZAMACs or the #Mail-In Collector Editions, then this is also something you’re after. Hold on, be patient with this one. If you can’t, you could always splurge on eBay, but I didn’t tell you to do that. Also, keep an eye on Walmart’s web site as the factory-sealed collector sets will have these in them as well.

Enough on telling you things you probably already know. Lets talk: #Volkswagen Sunagon. Not many Hot Wheels castings are given a second life like this #VW. The first tooling of the casting served the Hot Wheels mainline for two years (1982 & 1983). Then several colors of it appeared as a LEO Mattel India, Hot Wheels car. I have to imagine that is where it really gained its cult following.

The second tooling of the Hot Wheels #Volkswagen Sunagon has been much kinder to collectors worldwide after it was ultimately retooled for 2011’s The Hot Ones line. Its been in popular lines like #Entertainment, #Car Culture, and is now a #ZAMAC Collector Edition. But then again, when it appeared in Retro Entertainment, the line had distribution issues. When it appeared in Car Culture, it was the only vehicle in the set that came one-to-a-case. Throw in the COVID-19 pandemic and the lack of availability of the Collector Edition, and maybe the second tooling of this casting hasn’t been as nice to collect as it initially appears. It seems kind of like a curse… Yikes!

Hot Wheels Volkswagen Sunagon from the 2020 Collector Edition “Mail-In” series, a Walmart Exclusive Promotion in ZAMAC (side view, top up)

Still, as collectors, it’s our job to assemble collections of these awesome cars. Mattel would love more than anyone to have some sort of subscription to put every single one of these cars straight into our collections, but then our role of collector would really be benign, huh? I guess that’s something to think about.

Either way you spin it, the #Volkswagen Sunagon has once again been produced and it will be fun to see where these ultimately end up being made available to collectors. It’s one that I am fortunate to have received already — thanks in part to a generous collector — and I hope that these are made available soon. This one looks really good in #ZAMAC. But then again, which vehicle doesn’t?!?!?