The Hot Wheels #Acura NSX GT3 makes its #First Edition debut in the #2019 Hot Wheels #Replica Entertainment line. Its in the second mix for 2019 known as mix “M” if you’re buying by the case, which is good to know as I don’t expect these to last long on the pegs. This new #NSX casting wears a #75 #Advan livery, and essentially serves at the “now” version in a “then & now” pairing with the 2017 Car Culture / Race Day: ’01 Acura NSX.

This new #Replica Entertainment #Acura NSX GT3 could have easily been a part of the #Car Culture line. However, given that Replica Entertainment covers cars from TV, movies & video games, its perfectly suited for the line with its #Project Cars 2 designation — which, I believe, makes it a playable car in the video game.

As you can see above, the new 2019 packaging for #Replica Entertainment takes on a more #Car Culture / #Pop Culture form as the large, multi-piece plastic bubble is gone and replaced with a smaller, form-fitted bubble. Behind it (and the car) is a film strip with icons for TV, movies and video games in it. We’ve seen all of these genres in Replica Entertainment before, but its nice to see the packaging finally represent all three facets of the line. 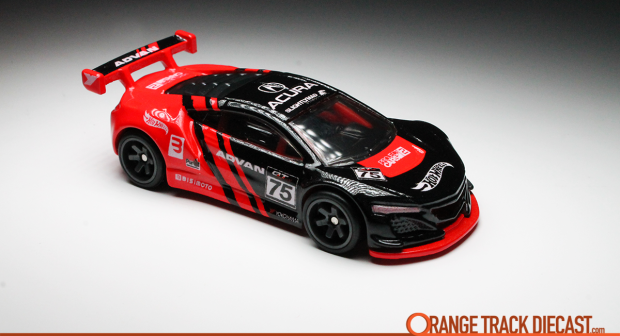 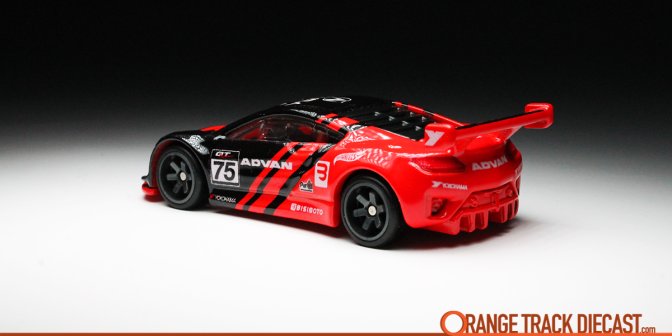 The numerous applications of the #Steve Vandervate Graphics are done essentially flawless. The #Acura NSX GT3 features a wrap on the back-half of the car, while featuring various sponsor logos from front to back. American collectors have fully embraced the Japanese-branded, #Advan graphics, as Hot Wheels has done several vehicles with this livery now, and all have been hits. In addition to expanding portfolio of Advan releases that Hot Wheels has, this car also joins the fleet of Hot Wheels that are playable in #Project Cars 2.

This #First Edition release of the #Acura NSX GT3 was originally scheduled to be released in 2018, but for whatever reason, it got pushed back to 2019 — it was clearly worth the wait — barely edging out the casting’s second release in the Car Culture / Open Track series, due out within the next month. Its appearing in the #2019 Hot Wheels #Replica Entertainment “M” cases hitting retail now, and does come three to a case (of 10) so hopefully it is all that much easier for you to find. This release won’t last long on the pegs, so don’t delay and get out and hunt today! You’re going to be happy with this one.