The re-introduction of the #King Kuda to the Hot Wheels mainline has been nothing short of momentous. Let that sink in: momentous. How do you ask? Well, I’ll tell you right off the bat that it doesn’t pertain to the Super #Treasure Hunt hoopla. I realize that is really the only conversation about this car being had — or at least what I’ve experienced in the several social media avenues I travel down daily. Sure, the super is nice in its #Spectraflame black paint and #Real Riders wheels, AND its part of a pretty cool mainline series in the #Checkmate series. However, the historical significance of this retooling outweighs both of those in my humble opinion.

This brand-new Hot Wheels #King Kuda draws a much closer comparison to the original 1970 #Hot Wheels Spoilers King Kuda — a car that hasn’t been released in 48 years! You may say, dude… or Brad… or something like that…. “I have a ton of King Kudas in my collection from recent years, what are you talking about???” … If that is the case, compare this one with the “Fat Elvis” King Kuda from 1998 to 2017. You’ll notice the overall casting is much different. I’m not sure how the “Fat Elvis” casting came to be, or why Hot Wheels continued to perpetuate the usage of that casting through multiple toolings, but hopefully you’re with me in agreeance that this new King Kuda casting is a vast improvement. It truly came as a surprise to see a more accurate rendition of the 1970 #Spoilers #King Kuda in the #2018 Hot Wheels mainline versus the “Fat Elvis” King Kuda we saw just last year in the Spoilers tribute series released on HotWheelsCollectors.com (HWC). Part of you has to wonder if the original plan for this #Ira Gilford Designed casting was to be in some sort of Spoilers tribute series for HWC or for the 50th Anniversary at retail. It just seems strange that this one would appear in the #Checkmate series — well, besides the “king” aspect, but we’ll get to that.

Spoilers are not foreign at the basic level as just this year, the #Plymouth Duster Thruster appeared in the ZAMAC Flames series — and for $1, I will keep buying them! These #Muscle Cars with #Blown Engines are one of my favorite early Hot Wheels segments. Instead, I am going to speculate a little that this new #King Kuda casting was moved from from premium line, in favor of the mainline, based solely on that fact that its name makes it the perfect car for the king chess piece in the #2018 Hot Wheels #Checkmate series. 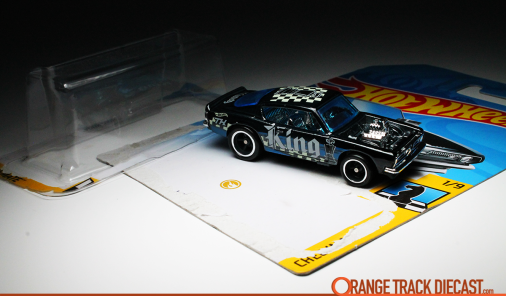 Speaking of the #2018 Hot Wheels #Checkmate series — for those of you that are collecting at home 😉 — you should have been able to add last couple pieces for the black side of the board after finding the 2018 “L” case assortments. The #King Kuda (king) and the #Volkswagen Beetle (pawn) were the last two I needed to complete the “black side” of the chess board. The June 16th National Target Event yielded those pieces and I even got lucky finding the Super #Treasure Hunt #Variation digging in one of the original kids’ station coloring buckets after most people had left. The white colorway of the #2018 Hot Wheels #Checkmate #King Kuda should be out soon as it will start hitting in either the “P” or “Q” assortment case codes. Its a release that I need to complete my chess board, AND its a casting that I think I might want to collect, especially if they keep releasing it at the basic level — so clearly I will be buying multiples of the white colorway in the near future.

As for the future of the Hot Wheels #King Kuda? Well, I hope the Hot Wheels team phases out that old “Fat Elvis” King Kuda and replaces it with this new — more historically accurate — King Kuda. Yes, that includes using this design at the premium and HWC/RLC levels as well. So while collectors may not be saying much about the casting now, as the hype train is still taking passengers at the station, I think this will be a special casting in the years that follow.