After 14 months of waiting, the 2017 #RLC #sELECTIONs #’66 Chevy Super Nova is here! For folks to think that is an absurd amount of time to wait for a Hot Wheels car that you ordered, hear me out. The RLC sELECTIONs are made to order — yes, MADE TO ORDER… so as soon as your order is placed, the manufacturing process can begin. Hot Wheels cars are manufactured on a 12 to 18 month timeline (due to scheduling, gathering of materials needed, approvals, etc.), and understanding that notion should help with the patience when it comes to something as special as RLC sELECTIONs vehicles.

The RLC #sELECTIONs process is truly unique as it was a first of its kind in the toy industry to collect collector input to help “design” a new release. Back in 2004 — to coincide with the U.S. Presidential Election that year — the sELECTIONs were introduced, hence the reason “ELECTION” is capitalized in the name. Collectors “elected” a casting to be elevated to RLC status, were they would also vote for its color, wheels and deco.

Today, we may be down from four sELECTIONs vehicles (2004) to one sELECTIONs vehicle (2018), but that hasn’t hindered the process from being any less special. Instead, those RLC members that vote, and participate on the forums, are greeted by the HWC staff who present the voting options in a variety of ways. HWC Site Admin, Gary Barnum creates the polls that are narrowed down from a list of available tools (castings) from Hot Wheels Designer, Brendon Vetuskey. RLC members debate the worthiness of their selection for each week the various polls are live. After that final selection of casting, color and wheels are selected, Hot Wheels Graphic Designer, Steve Vandervate (HWCVan) will then solicit the forum users on graphic design. In the last few years, its this interaction that Van has with the membership that is truly unique — and its something, if you’re not a part of, you should be! Had it not been for this interaction that Van has with the RLC membership, I’m not sure the 2017 RLC #sELECTIONs “Gassa Nova” would have come out so awesome. Van does amazing work as he designs just about every Hot Wheels car in the adult product lines — HWC/RLC, #Car Culture, #Pop Culture and #Replica Entertainment. His work is always top notch so we would have gotten a cool car none-the-less, but I feel its his involvement with the RLC membership that turns a potential cool car into something collectors will always remember.

This #’66 Chevy Super Nova is definitely one of those cars that will stand out in a collection of thousands of Hot Wheels cars. From the card art (above) to the actual car itself, its as close to perfection as you can get — as it closely resembles another near perfect car. Van realizes he struck collector gold with the “Candy Striper” ’55 Chevy Bel Air Gasser so he is simply spreading that sensation among those who cannot afford the $500-$600 price tag that Candy Striper now commands. Just like the Candy Striper, this one has a unique name to it — one that it will forever be referred to as: Gassa Nova. To quote Van on the reasoning behind the name, he said this: 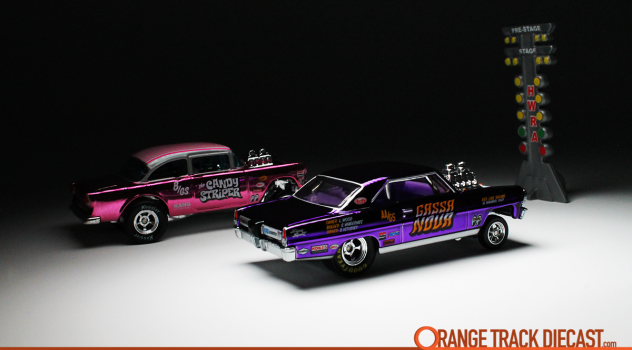 Collectors responded well to the presale of the Gassa Nova back in May of 2017. With no purchase limits, some collectors chose to order upwards of 40 to 100 of these bad boys (since there aren’t charged until they ship) thinking they could flip for a quick profit. Even with 11,500 of these now out there, profiteers are getting $40-$50 for these, doubling the amount they paid for it when these shipped just a couple weeks ago.

Van was right. Man this thing is boss! I don’t really see a reason to have more than two — one to open, and one to keep packaged — but this car certainly has me kind of regretting I didn’t get more. The #Spectraflame purple paint on it is so smooth, giving it a glass like finish. The tampos are all top-notch as well — even the ones with small lettering. You have the AA/GS class on the sides, and a mix of licensed & unlicensed sponsor logos. You know the licensed ones in Mooneyes, Edelbrock, Holley and Bell; but its the unlicensed ones that give props to many of the Hot Wheels team members that bring us these beautiful adult collector lines — like the RLC. “Koiles Suspension” is for Hot Wheels Senior Packaging Designer, Julian Koiles, whose work on #Car Culture made him probably the most well-known Hot Wheels Package Designer in the history of the brand. “Liu Logistics” and “LZ Transmissions” on the back are for Hot Wheels Marketing Managers, Jimmy Liu and Liz Tran. In addition to those logos, the Owner/Builder/Driver combination on the sides represents the Designer of the #’66 Chevy Super Nova, Larry Wood (Owner); the Graphic Designer of this release, Steve Vandervate (Builder); and the man who executes these premium RLC cars (including many of the retools)… Hot Wheels Designer, Brendon Vetuskey (Driver). From being involved in the process, I can tell you that graphic was a late addition to this release, but its one that gives this car a true vintage racing feel. 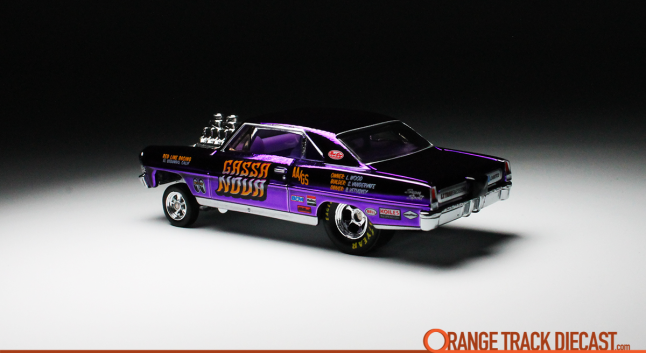 As with every RLC #sELECTIONs release, its easy to look back on “what could have been”. In the three rounds of casting selection, the #’66 Chevy Super Nova went toe to toe with three other great Hot Wheels castings. It easily beat the Honda S2000 in the first round, and handled the ’64 GMC Panel (w/ opening rear door) in the last round. It was its second round victory though that was the biggest game changer as it narrowly eclipsed the popular ’55 Chevy Bel Air Gasser, which was expected to run away from the field and easily win for 2017. In the end of the round though, it was the underdog #Nova that became a boss after a 413 to 409 vote victory.

The rest of the voting was more or less landslide victories. Spectraflame purple beat dark red by 11% in round 1, then bright orange by 25% in the final. The #Real Riders 5SP/Slick Drag Wheels combination topped the Race Drag Dish Wheels by 13%, and the yellow Goodyear tire tampo crushed the White Hoosier tire tampo option by 29%. Its Van’s several days of soliciting collector input that finalized the design, and now, after 14 months, the Gassa Nova is forever immortalized in Hot Wheels form. 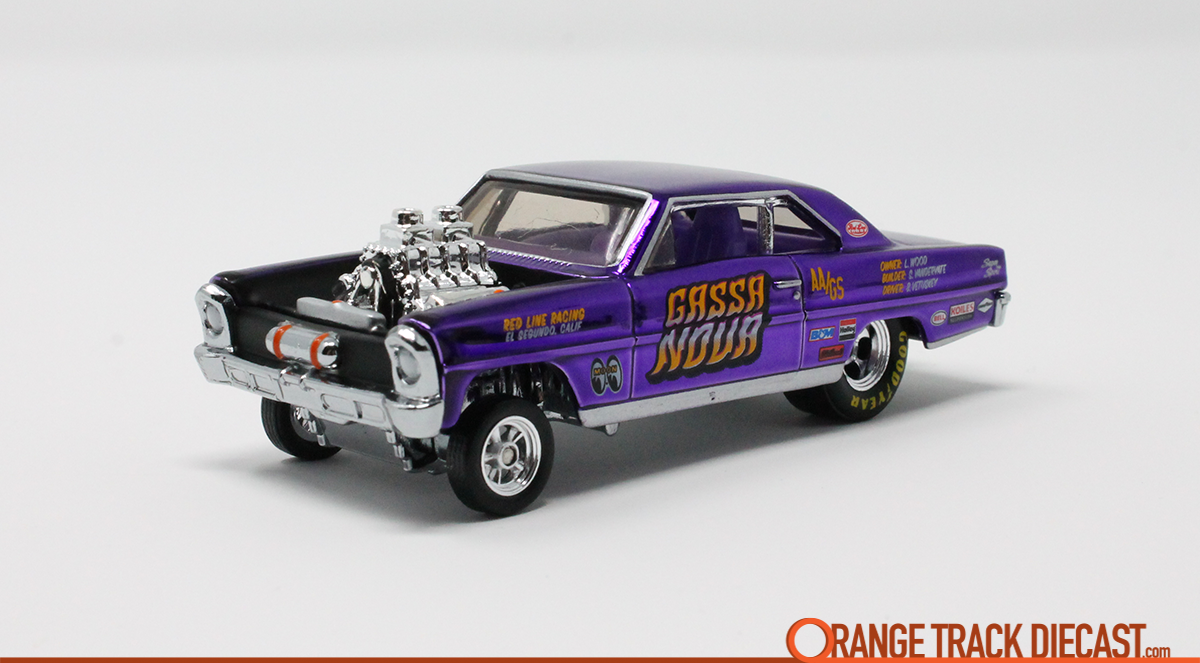