There is a new bad-ass casting in the Hot Wheels lineup and it has gotten paired with arguably the most bad-ass bounty hunter of all-time, #Boba Fett. The Hot Wheels #’60s Ford Econoline Pickup makes is #First Edition debut as part of the #2017 Hot Wheels #Pop Culture line in the #Star Wars #Bounty Hunters Series.

First off, I know a lot of collectors prefer the #First Edition of a casting to be clean, free of any non-essential graphics. I more-often-than-not tend to agree with that sentiment as its often the first release of a casting that really gets the collectors talking. Since the #’60s Ford Econoline Pickup was set to make its debut in the #Pop Culture line, there really was no way around the graphics thing.

So next best thing? You hand it off to Hot Wheels graphics guru, Steve Vandervate, mix in a little #Boba Fett, and watch him make this thing sizzle. Dark red seems like a natural pick for color, Boba firing his blaster with arm extended is powerful, and the #Real Riders Steelie Wheels were just an all-around great pick. 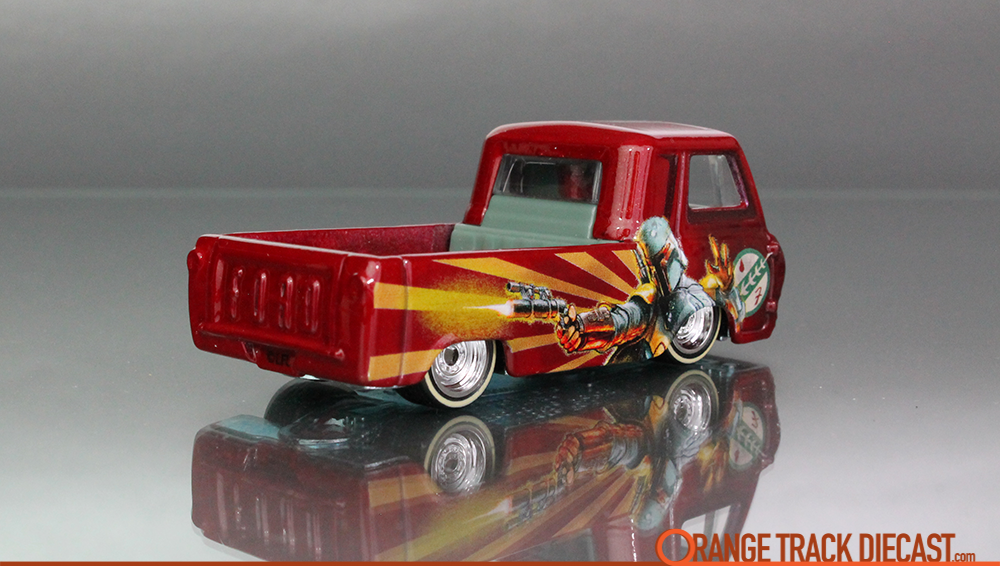 As if the casting didn’t appeal to the inner-kid in you already … a quick peek into the bed of this truck reveals an upside-down skateboard just chilling back there. Classic #truck, #Boba Fett, skateboard, #Real Riders, gimme gimme gimme!

Now this #’60s Ford Econoline Pickup is brand-new, as in, “just started appearing in the U.S. last week, new”. Collectors have already started marking this one as the one to get in the #Bounty Hunter Series. After all, its a new casting in a line that has seen many repeats AND it features a #Star Wars character that has a cult following of his own.

The Hot Wheels #’60s Ford Econoline Pickup is hitting retail now and this is your chance to grab this one for retail prices. I expect this one to be popular with collectors due to the aforementioned criteria so don’t sit on the fence when perusing the pegs at your favorite retail establishment. Lastly… anyone know where to get a miniature Han Solo frozen in carbonite to put in the bed of this thing???