In the last month or so my collection of the Hot Wheels #Mach Speeder doubled in size. The #Hot Wheels iD release — which was a holdover from 2019 –finally shipped from Amazon in early January. Also in early January, I found the 2020 #Mystery Models Series 1 […]

There was a time where I didn’t collect premium Hot Wheels — so, I get it. Not all collectors, collect all Hot Wheels lines. Us, as collectors, are a very diverse group ranging from all types of backgrounds and varying levels of collecting. Being as immersed in the […] 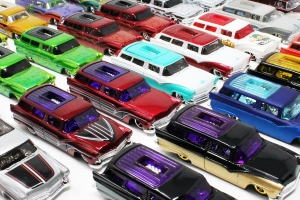 Four years have passed since we last saw the Hot Wheels #8 Crate. It sure doesn’t seem like it was that long ago that I was finding the 2016 Stars & Stripes release on the pegs. There have been several #Station Wagon castings that have been released since, […]

My #Hot Wheels iD #Rip Rod finally shipped from Amazon, and I received it yesterday. I have to admit that I’ve been quite excited to receive it as I never like leaving any loose ends to a casting collection; and this is yet another casting that I collect. […]

Whats up with the Walmart “mail-ins” the last few years? These releases — known as formerly as Collector Editions — haven’t been featured as mail-in promotions for a couple years now. Some of that may have to do with the success of the Legends Tour and the sheer […]

If you went to GameStop this past weekend, chances are you were seeking out the almighty super treasure hunt, GameStop Exclusive colors, and/or just some new 2020 Hot Wheels. I, like many others, ordered an event exclusive 36-count case online from gamestop.com the week prior but that didn’t […]