Every year, traditional collectors tend to complain about the influx of fantasy castings that are introduced into the Hot Wheels lineup. Some don’t like the castings, other don’t like how much plastic is used, while others simply don’t like any #Unlicensed Hot Wheels. Fortunately, there are a growing number of collectors that realize the diversity of the brand. Just like any other diecast company out there, anyone that has a #Ford license (for example) can produce the Mustang. That goes for the licenses of other car manufacturers as well. What sets the Hot Wheels brand apart are these #Unlicensed Hot Wheels that are designed in-house by the Hot Wheels designers that grasp the imaginations of kids and collectors alike, which promote the brands fundamentals of speed, power & performance through all types of vehicles.

Designing cars may seem simple enough, but its really not — try it! After you take that into account, consider that these vehicles all have to look cool, perform on the orange track, and be manufactured in a way that they can sell for under a buck (as part of the basic line). Not so easy, huh?

One of these brand-new, #Unlicensed Hot Wheels cars for 2016 is the #Futurismo. This aerodynamic race car of tomorrow was designed as an #Electric Vehicle that showcases its large, chrome electric battery through a glass canopy. 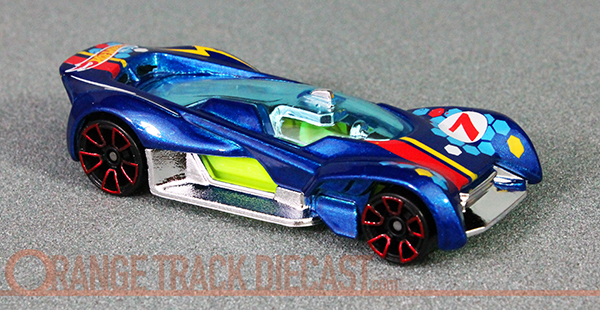 With Hot Wheels designer Leeway Chang designed the graphics for all of the #HW Race Team (2016), he decided to carry over elements of the car/casting into these popular #Hot Wheels Race Team graphics. As you can see in the images, he chose to carry over the cells of the electric battery so you get that casting was meant to have an electric racing vision.

As far as the casting, I am not so certain that I would have picked this up had it not been for the #Hot Wheels Race Team graphics — that you can see I clearly collect. It is a nice casting as it was one that was clearly built for the orange track. As with all the #2016 New Models, it will be interesting to see how this casting is utilized in the future and what future graphics it wears. If I had to predict, you should see the Futurismo is the mainline for years to come, along with various 5-pack and track set releases — and there is an outside chance this will be part of series representing the growing number of #Electric Vehicles in the Hot Wheels lineup. If you are interested in these types of vehicles, make sure you also check out the Power Surge, another cool electric race car.