Welcome to October Hot Wheels world! The month of October typically plays host to the Hot Wheels Collectors Convention in Los Angeles, another new year of Hot Wheels with the “A” cases hitting stores, and some sort of Halloween series appearing in shippers. With the convention this week and the 2017 “A” cases just starting to hit stateside, the month will be great for Hot Wheels collectors.

This year, Hot Wheels decided to ship the #Halloween cars a little early with some even appearing at retail in late July. This was a great call as stores weren’t always the most timely in putting out the Halloween shippers before Halloween — therefore it wasn’t uncommon to see Halloween cars discounted as early as November.

Two years ago, there was no price slashing when it came to the #Ghostbusters Ecto-1. Easily the most desirable vehicle out of the five Halloween cars that year, the Ecto-1 was hoarded as many were holding it for trade bait. As much as I personally despise hoarding, its a part of the collecting game as many collectors who did so, were able to trade and/or sell to collectors who couldn’t find these or those who simply didn’t have a local Kroger (or its many affiliates) nearby. With the series being a #Kroger Exclusive in 2014, you can bet the quantities of the releases in this series were nowhere near standard production runs that show up at all of the big box stores.

The Hot Wheels #Ghostbusters Ecto-1 casting is always a hot seller so it should come as no surprise that this one was hoarded heavily. Considering that the Ecto-1 was released in the #Halloween series in 2012, and that release had been selling for over $10 at the time, it seemed like a no-brainer for collectors to pick this 2014 release up for a little over $1.

Just like that 2012 Halloween release, the 2014 Halloween Ecto-1 wore Halloween-themed paint and graphics designed by the Hot Wheels graphic designers. For the most part, collectors embraced the non-Ghostbusters-licensed graphics as they were a far cry from the standard movie designed that has already been utilized many times over. So while you shouldn’t have any worries picking up this year’s Halloween cars (as they are available at a variety of retailers), be thankful you’re not out there chasing a ghost! …as many collectors were in 2014 when trying to find this Ecto-1. 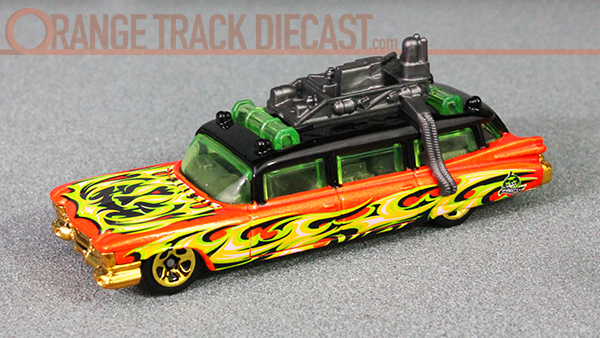