Yesterday’s article about the white Datsun 620 from the 2016 Hot Wheels Trucks series brought to light that some hidden series are out there whether they are unannounced or completely unintentional. While I won’t go as far as to say that the two #Renaults you see below are a hidden series, it was pretty cool to find two cars from the same auto maker in similar paint schemes. A little more than a month ago we covered the 2011 New Models: Renault Mégane Trophy and the history of the real car along with the Hot Wheels casting. Today’s its the Renault Mégane Trophy’s younger brother which was released this year in the HW Exotics Series as part of the #2016 New Models — the Renault Sport R.S. 01.

If there was one Hot Wheels car the #Trapezoid 5-Spoke Wheels look good on, its this #Exotic #Race Car. The Renault Sport R.S. 01 is one of those cars that looks fast while sitting idle as its aggressive styling does the trick. Combine that with the details in the graphics work and its probably one of the better releases we have seen in the mainline for the last couple of years.

Since the elimination of the plastic spoilers in the Hot Wheels mainline has started, most spoilers seem to be enlarged a little and visually, most people have a hard time separating the spoiler from the body as they are now the same color versus being mold in a contrasting color of plastic. While this may seem like a negative, it isn’t as having the metal spoiler in this case allows for “RENAULT” to be cast into it. Not having to have a “RENAULT” graphic on the wing allows for detail in other places like the sides of the spoiler having red ends with “Renault Sport” on them.

As with any Hot Wheels basic car that is based off of a real 1:1 car, some detail has been omitted. So while the graphics team did a great job under the restrictions they are held to, it would have been nice to see the front and rear fascia detailed as thats where the backed-out panels and the lights are which give the cars its complete look. With that said, this one is Hot Wheels casting that is certainly deserving of some sort or premium treatment as there is certainly more to be desired after seeing this picture of the real 1:1 car. 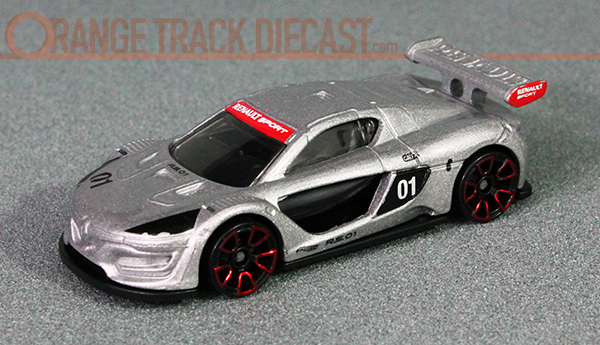