Hot Wheels collectors were introduced to a new term this year as it relates to #Chase pieces: “Ultimate Chase”. Going back to last year’s LA convention, it was teased that the #2018 Hot Wheels mainline would feature the first Ultimate Chase piece. The several months that followed had collectors debating the scarcity of what some dubbed a “super-duber hunt” as many had assumed the piece would be more scarce that your typical super treasure hunt. Ultimately, the Ultimate Chase #Bone Shaker seemed to turn up about as frequent as its “L” case super #Treasure Hunt partner, the Checkmate King Kuda.

Released in a similar fashion as your typical super #Treasure Hunt piece, the Ultimate Chase #Bone Shaker features #Spectraflame Paint, #Real Riders and additional graphic upgrades over its common variant partner. Instead of the “TH” that adorns all super treasure hunts nowadays, it features an “Ultimate Chase” logo on its hood. This is hardly the first time the Hot Wheels #Bone Shaker has received this kind of treatment. It has essentially been in most Hot Wheels lines since its inception in 2006. Since then, it has received the super #Treasure Hunt treatment twice: 2009 and 2013. Below, you can see all three together as the Ultimate Chase #Variation joins the 2013 HW Showroom / American Turbo super TH (magenta) and the 2009 super Treasure Hunts (black/gold) releases.

If you recall the #Bone Shaker wearing Hot Wheels race team graphics previously, you probably remember the 2012 HW Racing release. It was recolored in several colors but the initial release was metalflake blue, finding its way into my personal #Hot Wheels Race Team collection. Below, you can see this year’s common variant in matte blue paired with said 2012 HW Racing release.

If you watched the 2018 Hot Wheels “P” case unboxing I posted yesterday, you would have noticed there is a dark orange variant of this #HW 50th Race Team release coming. I will probably pick one up to be included as part of my modest #Bone Shaker collection, but its color excludes it from my aforementioned #Hot Wheels Race Team collection. It will join these two variants which came in two excellent, but very different, blues. 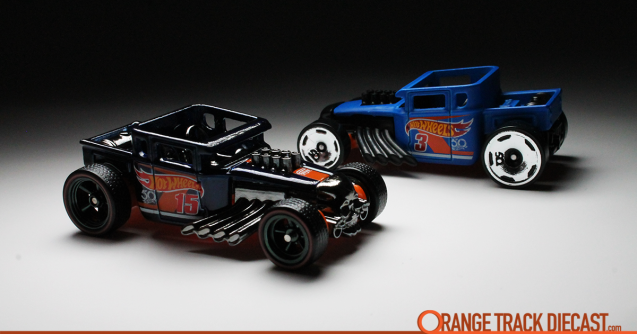 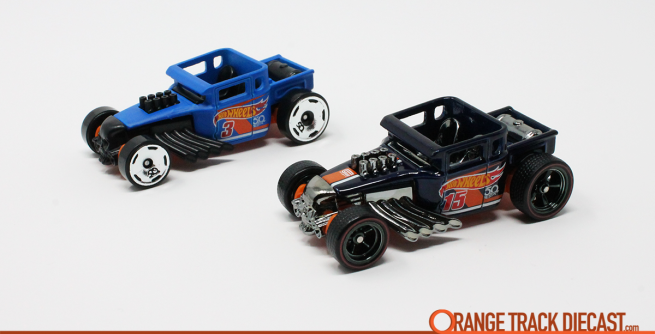 The #HW 50th Race Team common variant in matte blue has the same #Logo Slot Wheels that the other nine vehicles in the series have. The opinion on these vary form collector to collector, but this one thinks they do look decent on the #Bone Shaker casting. Still, its the #Real Riders 5-Spoke Wheels on the Ultimate #Chase variant that win out. These RR5SP wheels seem to look great on just about everything and the fact that these were black-chromed out and given redline tires, makes the ultimate chase one easy car to look at.