If you could sum up modern day Hot Wheels collecting in a nut-shell, one could argue its like keeping up with the Joneses. You’re buying the latest cars, keeping up with the assortments, tracking others’ finds online, and of course, hunting for the #Treasure Hunts — whether to keep, or for bartering purposes. Personally, I do a good job of not getting into the “gotta-have-its” myself as I can usually find most Hot Wheels cars through hunting at retail, and through some gracious friends. Although, even as a Hot Wheels collector of 20+ years, I do still have a hard time finding those elusive Super Treasure Hunts, for a variety of reasons. So when Hot Wheels marketing plans the assortments, and the graphics team designates the Treasure Hunts, I love (and hate) when my favorite castings get the nod — love the cool $TH variants, hate that I know I am going to have to spend some extra cash to get them.

This year, as part of the #2017 Hot Wheels mainline “J” case assortment, the #’13 Dodge Viper SRT got the Super #Treasure Hunt nod. Dressed in #Spectraflame Gold paint, its a variant of the regular yellow colorway from the #Then and Now Series. Representing the “now” in that series, the “then” part — the #Dodge Viper RT/10 — should be out as part of the “M” case assortments hitting the U.S. in about two months.

As you can see, in the case with most Super #Treasure Hunts, they make a great pair with their regular counterparts. While $TH variants often have additional graphics, this #Viper only has the addition of the “TH” underneath the SRT badging on the sides. It can be argued that there is no reason to differentiate the two (more than they already are) as the color difference is drastic enough — and, I’ll take that over the regular, yellow colorway having those venomous, black stripes omitted. 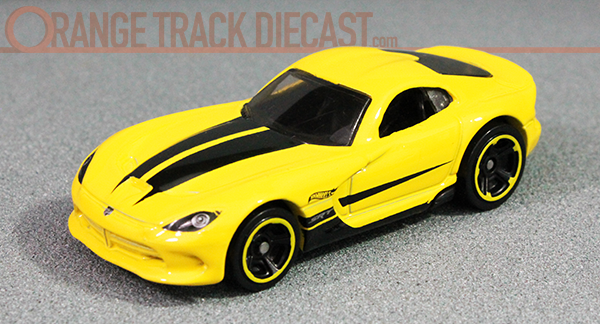 These two variants from the #Then and Now Series make 7 and 8 for this #’13 Dodge Viper SRT casting which was introduced in 2012. While we don’t know (as of now) if there will be a colorway of this car before the year is over, we do know that the casting will show up at least one more time this year as part of the licensed assortment for #Forza Motorsport, which will most likely be a #Walmart Exclusive. Until then, best of luck finding this golden snake! 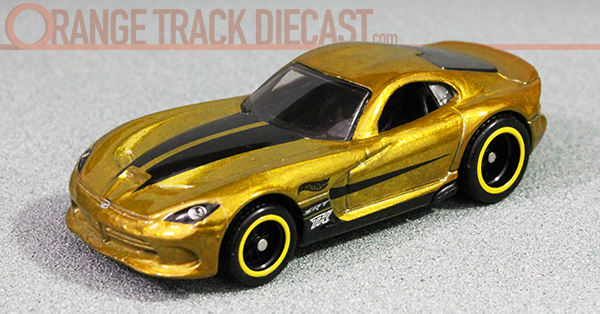 RELEASE DETAILS: Spectraflame Gold Body (metal). Clear Windows. Black Interior. Yellow-Rim, Black Real Riders 10-Spoke Wheels. Black Base (plastic). Made in Malaysia. Toy# DVC97. Released in 2017 as #10 of 10 in the Then and Now Series (not numbered as part of the 2017 mainline).