With the #RLC #sELECTIONs over at HotWheelsCollectors.com (HWC), Hot Wheels has continually done what no other diecast car company has done — let the collectors have a hand in designing cars. Its every collector’s dream to design their own Hot Wheels car — especially this collector’s dream! — however, that just isn’t feasible for a company Mattel’s size. So the next best thing? The RLC sELECTIONs program that has been operating through the HWC / RLC forums since 2004. Set up tournament-style, collectors vote for their favorite castings in a head-to-head format where the winner advances. Additional items like color, graphics & wheels have also been voted on.

Originally a 4-car series, the #sELECTIONs have unfortunately been whittled down to 1 per year but that hasn’t deterred the enthusiasm displayed by collectors who lobby for their choices every round. Last year’s winner (of an 8-car bracket) was the #Texas Drive ‘Em, who beat out the uber-popular #Datsun Bluebird 510 and possibly the most popular Hot Wheels vehicle of all-time, the #Volkswagen Drag Bus.

In the color round it was #Spectraflame Smoke narrowly beating out my favorite, in Spectraflame Dark Green, by a mere 19 votes! Can you believe that, 19 votes were all that separated this truck from looking complete different! 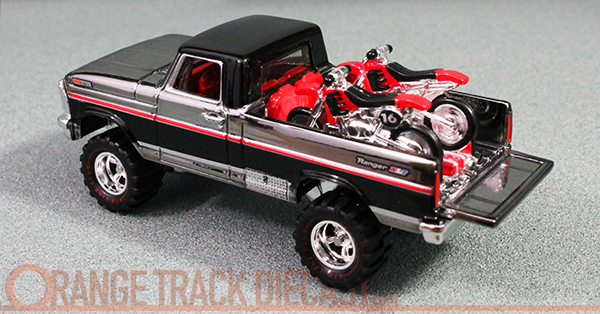 In the vote for wheel tampo, the “Red Line Club 2016” tampo won by a landslide over the other four licensed tires options: “BFGoodrich”, “Firestone”, “Goodyear” and “Hoosier”.

For fans of the #Larry Wood Designed, #Texas Drive ‘Em (TDE), you may have noticed this release looks a little different compared to the previous releases with #Real Riders. This #sELECTIONs process ushered in a whole new era of wheel choices for the TDE. It was HWC member “SKYNET 2029” that posed a question on 4/1/16 in a thread titled, “Why do they ALWAYS use Deep-Dish RR?!?“. Of course that was in reference to the TDE and how it had previously only been released with #Knobby Real Riders Deep-Dish Wheels.

Photo by SKYNET 2029 on the HotWheelsCollectors.com thread titled, “Why do they ALWAYS use the Deep Dish RR?!?” on 4/1/16. Shown is the difference in the previous version of the hub (left) and the newer, compatible version of the deep-dish hub for the knobby real riders (right).

His detailed breakdown of how the Deep-Dish hub (for that tire) had been retooled in 2013 to align it with the format of the other Real Riders wheels got the attention of the Hot Wheels Graphic Designer in charge of completing this release, #Steve Vandervate.

Steve, known as “HWCVan” (or Van) on the forums, was very open and honest about this situation as he stated the following on 4/2/2016:

As SKYNET 2029 pointed out, the RR Off Road wheel and hub were originally designed (and still cataloged) as a unique tool set and could not be interchanged with components from other designs/tool sets. Apparently this may no longer be the case, and if confirmed, I will lobby to add one more round of voting to decide on hub style.

It was only a few days later that Van was able to confirm that this indeed was the case, as the bonus round of wheel hub voting he lobbied for, showed up on 4/15/2016. The end result was the #Knobby Real Riders 5-Spoke Wheels demolishing the other 4 choices.

On April 26, 2016, the 1-week sale window opened up for #RLC members to pre-order this made-to-order #sELECTIONs vehicle, based of the rendering provided by Van. It was the first time a sELECTIONs vehicle had no limit per member and I can say I had a small hand in that. Since the popular poker game Texas Hold’em is associated with “no limit”, I lobbied to “HWCGary” for this vehicle to be “no limit” as well — he obliged. 🙂 This “no limit” on made-to-order sELECTIONs vehicles has been carried over to this year, and the 2017 sELECTIONs #’66 Chevy Super Nova (which is currently open for orders) is expected to surpass the #Texas Drive ‘Em‘s quantity of 9,000 pieces.

There is so much detail on this truck making this one of the best #Texas Drive ‘Ems to date! With the pair of red, #16 dirt bikes (and accompanying red gas containers) in the back, chrome tool boxes on the sides, and the badging (“Ranger XLT” on sides and “FORD” on front of hood and on rear tailgate) many RLC members were glad this one had no limits as they could order multiples for their collection and for friends. In this collectors eye’s, it was well-worth the $19.99 + s&h cost. The only part that stunk was that it took a full year for collectors to receive, as it didn’t start shipping until the last week of April 2017. In the end however, patience prevailed and those collectors that chose to keep their backordered TDEs, were handsomely rewarded with one of the best Hot Wheels ever made! Yeah, I said that! Special thanks to all that had a hand in making this truck… such a great story and what Hot Wheels, and the #sELECTIONs process, are all about. 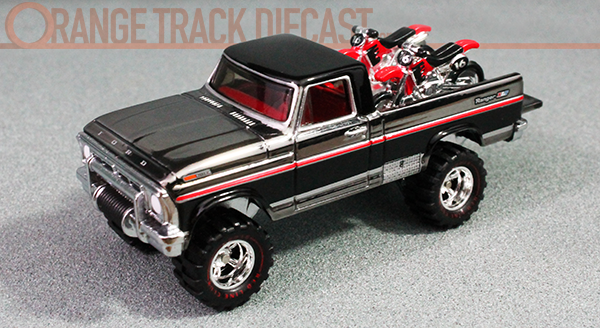 For more images of your favorite Hot Wheels vehicles, check out @orangetrackdiecast on Instagram!