Here it is, “The Midas Monkey”, which was long awaited by Hot Wheels collectors after appearing in a 2015 episode of Fast N’ Loud on Discovery Channel. In the episode, the guys at Gas Monkey Garage built the real 1:1 version of this ’68 Corvette in an attempt to impress SVP & Global Brand GM of Hot Wheels, Chris Down. They succeed and Chris states that The Midas Monkey will become a real Hot Wheels car.

Two years later, people all around the world are able to purchase The Midas Monkey in toy form. Officially known as the #’68 Corvette – Gas Monkey Garage, this #Blown Engine #Corvette was released as part of the 2017 mainline series, #HW Screen Time.

This Hot Wheels version of The Midas Monkey stays true to the car the guys at Gas Monkey Garage built, serving as a true replica. Most notably, the car features a metalflake gold paint job, #Blown Engine, and dual-side, quad exhaust; just like the 1:1 car. In the rear of the car, “The Midas Monkey” insignia graces the back panel. It is accompanied by a black & white Gas Monkey Garage license plate. 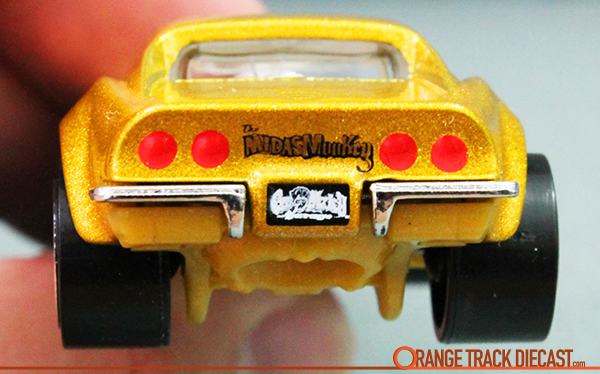 For a car that was based off of the 1968 Hot Wheels Custom Corvette, while trying to exude some modern flair, the Gas Monkey Garage guys knocked it out of the park. To me though, an even more impressing feat comes from the Hot Wheels design team and their ability to scale this thing down, making it look pretty darn close to the 1:1 that was unveiled two years ago.

Hot Wheels collectors are already assuming that this will not be the last we see of the #’68 Corvette – Gas Monkey Garage as we already know that this will not be the last #Gas Monkey Garage Hot Wheels car. This car seems destined for premium treatment (#RLC or #Replica Entertainment maybe?) as the #Redlines were clearly omitted from this retail release. While that remains to be seen, the next GMG Hot Wheels car that I alluded to will be the Hi-Po Hauler, which should make its debut in 2018 as a #RLC exclusive. For now, collectors are busy flocking to their nearest retailer in search of this release which just started showing up here in the U.S. as part of the 2017 “E” case assortments.

For more images of your favorite Hot Wheels vehicles, check out the @orangetrackdiecast Instagram.