Back on July 17th, the Hot Wheels Instagram unveiled this interesting contraption as part of “World Emoji Day” stating it would be available later this year. Well, the future is now and the #Emoticar is part of the #2017 Hot Wheels mainline. In the brand-new series named, #Experimotors, each casting has a special functionality behind it — we already demonstrated the ’70 Dodge Charger’s working suspension. Now, the Emoticar, designed by Hot Wheels Designer Kevin Cao, has a drum built inside of it that revolves to show a happy and a sad emoji in addition to having two open slots for you to Sharpie® in your own.

In the video below, designer Kevin Cao states that that they started with a small wheel base thats typically found in a “city car” or “hyper car” in terms of base proportion, which in turn gives it the sporty look they were going for. Then, the rest of the casting was essentially designed around the big yellow drum which is obviously the main part of the vehicle — featuring the two emojis and the two create-your-own slots. In addition to the emojis found on the drum several others can be found throughout the casting. First, you can see the “Grumpy Skull Face” on back…

Not pictured is a happy face on top. On the base you can see a couple more in the “winky eye” in the back, the “swinky eyes” in the front, and the double thumbs up… 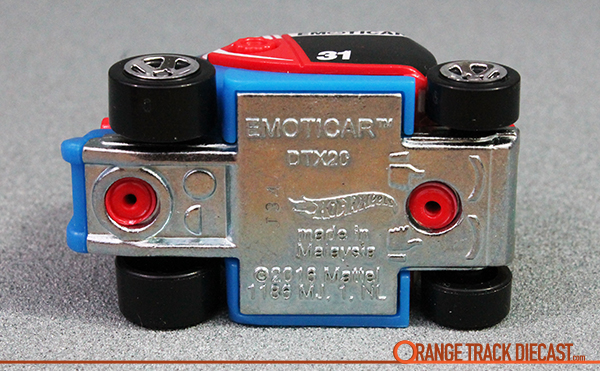 In front you can see the “glasses happy face” as what looks to be designed as an air intake and the “happy face” side of the big yellow drum. In all, there are seven emojis on this casting with the potential for two more. Kevin covers these all below in the YouTube video below that was produced by Hot Wheels. Make sure to check that out for sure!

The execution of the graphics on this one was also well done. The graphic designer continued the casting’s sporty theme by giving it a racing scheme complete with the #31 …and TWO MORE happy face emojis if you count the ones in side of the “O” in “EMOTICAR™”. While I haven’t gotten a chance to race this pop culture icon down the orange track yet, I have been hearing from a few other Hot Wheels enthusiasts that it actually performs quite well with its short & wide metal wheel base. This is ultimately what makes this car so unique, the functionality behind the drum and its ability to perform well on track. Kudos to Kevin Cao and the Hot Wheels team for really challenging themselves and being able to pull this unique #Unlicensed Hot Wheels design off!