As a kid who spent many years yearning for #Hot Wheels and #Star Wars to come together, I am definitely not taking for granted the treasure trove of Star Wars Hot Wheels released across so many different lines over the last several years. While I’ll admit, I don’t buy everything, I have bought several #Star Wars pieces from the #Hot Wheels Characters, #Carships and #Pop Culture lines.

In the last #Pop Culture series for 2016, Hot Wheels decided to honor the Star Wars concept artwork of the late #Ralph McQuarrie. Ralph had a major impact on the original Star Wars trilogy as many of his creations were brought to life. For me, that rancor scene from Star Wars: Episode VI – Return of the Jedi (1983) was just so cool the first time I saw it as the rancor became one of my favorite Star Wars creatures of all time. Needless to say, it was the killer rancor artwork that sold me on this Hot Wheels release!

Almost reminiscent of a bull fight, was the scene between Luke Skywalker and the rancor. While the card artwork shows only the rancor heaving a body to the side, the essential “stare-down” is captured on the sides of the #van — a very powerful image of man vs. beast. 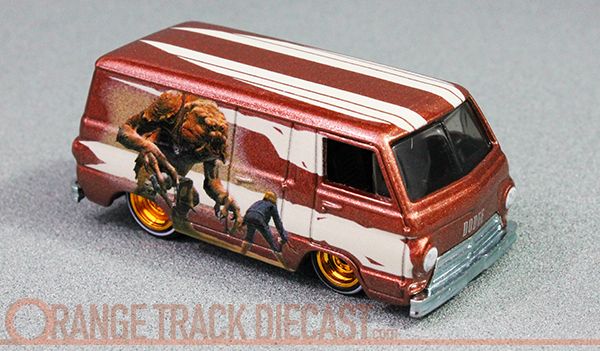 Of course, in the Hot Wheels #Pop Culture line, we have realized the card-facing side of the vehicle often contains an alternate graphic of the same subject matter. For this release of the ’66 Dodge A100, we don’t get another rancor in another fashionable position (baking a cake perhaps? just kidding…), however, we do get the epic throne room scene in which Luke Skywalker goes to Jabba the Hutt’s palace on Tattooine to confront him. 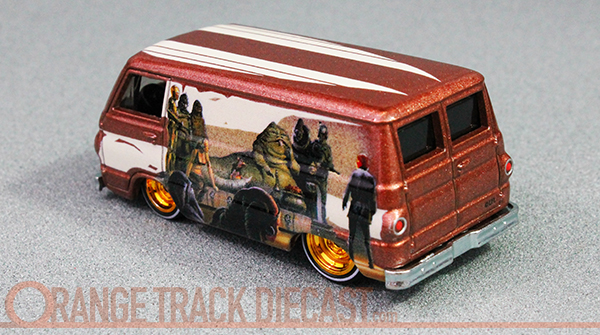 Both scenes are great stretched across this billboard of a casting — a casting that works very well for the Hot Wheels Pop Culture line. It works so well that the ’66 Dodge A100 was chosen for three of the last four Pop Culture mixes for 2016: Marvel, Peanuts and Star Wars. While its great to see this cool casting get that much use, its hard to look past that this casting was essentially type-cast in the Hot Wheel world, meaning it only serves one purpose. John Lambert from the Lamley Group wrote a great article about this just a couple weeks ago. So while this Pop Culture release is one that really speaks to me, I am pretty sure collectors are ready to see this casting move towards a more automotive inspired design after several releases in the #Pop Culture line.

Anyone have an enclosure with a metal gate (preferably one with spikes on it)? My @hotwheelsofficial #rancor @dodgeofficial van got out! @starwars #returnofthejedi #diecastphotography #ralphmcquarrie