There’s a new #Dodge #Charger in the Hot Wheels arsenal as the off-road reincarnation of the #Fast & Furious ’70 Dodge Charger, is a #2017 New Model. Straight from Furious 7 (2015), this replica of Dominic Toretto’s ride certainly does the movie car justice. In the movie, it was built to be dropped out of an airplane above mountainous terrain in order to infiltrate a remote location. The back of the packaging of this release had this to say about the car:

Modified with long travel suspension, limited slip differential and a tubular cage and armor, this epic Charger was built to pursue the enemy in outrageous high-speed chases — even after dropping 10,000 feet from a cargo plane!

While the Hot Wheels car surely wasn’t built in the same regards at the $1 price point, this #2017 New Model was included in a brand-new series called, #Experimotors. In this brand-new series, each vehicle has a special function. This ’70 Dodge Charger has a working, off-road suspension. How cool it that???

Designed by Hot Wheels designer Brendon Vetuskey, this casting’s design was not started from scratch. Rather, Brendon himself revealed that he started with the CAD drawing of the ’70 Dodge Charger R/T casting and modified that. The ’70 Dodge Charger R/T is another ’70 Charger casting that Brendon designed which was part of the 2011 New Models. Side-by-side, there doesn’t seem to be much resemblance past the fact that they are both ’70 Dodge Chargers.

In addition to that really cool, working suspension feature and the off-road wheels, this #Charger has the brush guard in the front, the hole in the roof and the spare tires in the back just like the #Movie Car. While Hot Wheels essentially stopped putting spare wheels in the back of cars, this genius design actually has the spare tires molded as part of the window piece. The tinted “smoke-colored” windows give the spares a blackish look and are only some detailing away from looking real.

As a fan of the #Fast & Furious cars and a collector of most of the Hot Wheels #Dodge #Charger castings, this was a must have for me! I have been eagerly awaiting to find this one and a lunch time stop yesterday at the local Target netted me two. Immediately, I felt the need to get this car into the wild and snap some shots of it for this article and for the new Orange Track Diecast Instagram account. If you like what you see below, follow us as I plan to upload some more scenic shots of other cool Hot Wheels cars and anything else automotive. 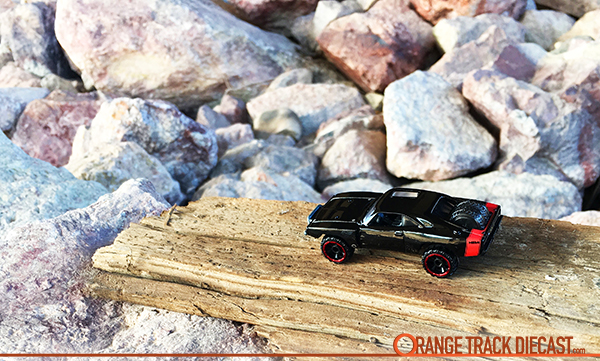 As you can see, the Hot Wheels ’70 Dodge Charger will surely end up on our Top 10 #2017 New Models list at the end of 2017. Hopefully, we aren’t deprived of more colorful releases of this casting due to the #Fast & Furious licensing associated with it — which hopefully pertains to this specific release as oppose to the casting. Also, many collectors hope this is a good sign that some of the other deserving cars from the #Fast & Furious movie franchise get made. While I usually don’t buy more than two of any Hot Wheels release, I may have to get out there and find a couple more of this one!

UPDATED 02/07/2018 — I have finally obtained the very hard to find #Bead-Lock Off-Road (BLOR) wheel variation. I haven’t freed it yet so the picture below shows it in its current state (in my collection).