Have you had your fill of Hot Wheels #Fast & Furious vehicles yet? I know I haven’t, but I have read that some of you have. Honestly, I haven’t found a good argument against it. We have seen a barrage of Fast & Furious cars lately as they have come in Hot Wheels basics and premium; but at the same time, we have seen some crazy diversity given what the brand brings. There has been a good dose of Imports and American #Muscle Cars. There is no doubting that. That’s the foundation of the Fast & Furious brand.

With the Hot Wheels and Fast & Furious partnership, we are seeing the brands dive into more kid-centric content. Fast & Furious Spy Racers is a TV series that made its debut on Netflix at the end of 2019. The Ion Motors Thresher was the first car from the show to be released when that came via the mainline this year.  It was almost the perfect execution for a licensed “fantasy” car as collectors responded well to the design despite many having not even seen the show. Have kids been responding in the same kind of light? No idea. I haven’t been in stores a whole lot lately so I don’t have the usual anecdotal evidence to provide on whether these are being snagged off the pegs. I just know that I haven’t seen a ton hanging. If the #Ion Motors Thresher is already a hit, it bodes well for future releases from this kid’s TV series.

If you’re struggling to see the appeal, put the whole fact that its a cartoon behind you. Collectors have clamored for tons of cars from various cartoons from their childhood. Can you imagine if we had the Mystery Machine, Animated Ecto-1, and TMNT Party Wagon decades ago? Chances are, you would have wanted them based on your affinity for the shows. Even the influx of Hot Wheels #Highway 35 World Race & #AcceleRacers collectors has proven that kids want products from the shows they watch. From a collector standpoint, Fast & Furious Spy Racers may be a little ahead of its time as we are seeing new product for a new show that hasn’t had a chance to build its base, but if Hot Wheels collecting has taught me anything, those kids will grow up and desire this product long after the show ends.

What will the makeup of the Fast & Furious Spy Racers collection look like then? I’m sure these four cars are only the tip of the iceberg. If that is truly the case, this set of hero cars could really be desirable by fans of the show. I know, its all speculation, but we’ve seen it happen before. With that said, let’s take a closer look at the cars.

When the #Ion Motors Thresher hit the mainline earlier this year, collectors were taken back by this fantasy car’s #Muscle Car approach. Hot Wheels has been producing fantasy muscle cars for decades and every time one hits, collectors speculate as to the inspiration behind it. The Thresher is a car that certainly looks #MOPAR-inspired, and given that the character, Tony, is the cousin of Dominic Toretto (Vin Diesel) in the Fast & Furious movie franchise, it makes sense. Dom’s Charger has become one of the most reproduced #TV & Movie Car toys and you can certainly see the bloodline here.

As with most licensed #TV & Movie Cars, it’s difficult for Hot Wheels to take liberties with the execution as you’ll often see slim-to-no changes in succeeding releases. Side-by-side, both releases of the #Ion Motors Thresher may look like nothing has changed in the execution. That may be true from the color and wheels standpoint, but the base reveals that this is actually a variant on the mainline tool. There is a switch on the base that slides forward extending some sort of weapon forward. It is a pretty cool feature given that it adds something to the design and #Moving Parts are always a welcome addition to any toy.

The #Astana Hotto is one of three castings to make their debut here — with the other two to follow below. Just like the #Ion Motors Thresher, its another great fantasy car design that looks like something you’d see on the streets. Its white color and rounded headlights had me thinking it was loosely based off a #Porsche but the back end looks a little more American, like say… a #Viper. As with Hot Wheels design, I am sure the designers of these cars took in all kinds of automobile design which can cause collectors like ourselves to see elements we can identify with singular brands. Its unclear on whether the Astana Hotto or the #Hyperfin will be appearing in the mainline this year as various lists have not been consistent on what the #1/10 car will be in HW Screen Time for 2020.

What’s cool about the #Astana Hotto is that it combines elements of street and rally car, giving it a very sleek and powerful approach. The rally light bar in the front is a nice touch and the slide-out bumpers on the side make for a nice #Moving part. The #Hyperfin is certainly the most “fantasy” of all these castings as it doesn’t resemble any kind of actual car at first glance.  However, upon further inspection, it looks like it could almost be a #Lamborghini that has been stripped of all excess weight. I know, its a stretch, but after all, these cars are not supposed to resemble real cars. My mind is simply trying to imagine the car in a more realistic setting. I venture to guess this will be the car the collectors leave behind. With that said, it is still a pretty cool car and one that looks uber-fast. It’s a great design. The swing-out wings are a nice touch as well. It’s a feature that we’ve seen on the Hot Wheels Airuption before, and it must be a pretty cool feature to discover as a kid. 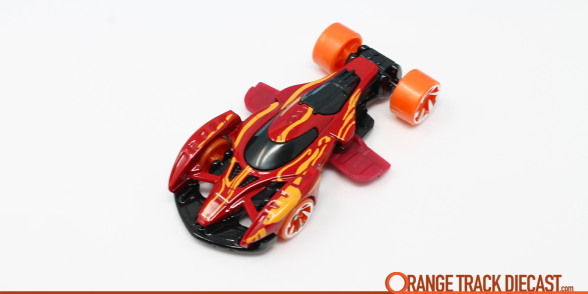 Lastly, we have a truck in the mix in the form of the #Rally Baja Crawler. This off-road truck is over-customized as it has a bajillion custom elements to it which I can only assume give this vehicle some kind of super-utility power in the show. The green and black motif has always been pleasing on the eyes since the days of the Racing Drones in the #AcceleRacers line, and the color breaks on the actual casting are in great spots. The #Moving Part on this casting comes in the form of a pull-out front bumper. No idea if that is for towing or for giving an extended push, but still pretty cool.

This special themed assortment of 4 cars has not been found at retail yet so it’s unclear as to where it will show up. Currently, the only place to find it is on eBay which is where I got mine from. A seller in Michigan is selling full sets and factory-sealed cases. If/when these show up in stores, I speculate the price will be north of $2 due to the #Moving Parts so figuring in that plus cost of shipping makes the current prices doable. So, if you’d like the grab these now without the hassle of finding them in-store, CLICK HERE to BUY NOW. Otherwise, I’m sure they will be hitting retail real soon.