This is so cool…

I have been hitting up local GameStops for the last week or so, in search of one of the latest Hot Wheels series to hit the pegs: #Satin & Chrome. I had mild success in finding the ’71 Datsun 510 Wagon, ’63 Chevy II and Custom ’67 Firebird — just couldn’t find the Aristo Rat, ’70 Plymouth Superbird, Custom ’71 El Camino and the #Gotta Go #Chase piece. However, thanks to another Hot Wheels collector — Aaron G. of Austin, TX — I was able to complete the set. Aaron said he is an avid reader of OTD, and reads the site daily. So, Aaron, THANK YOU for the kind words and the ROAK (Random Act of Kindness). He supplied the full set for you (the other readers) to see.

In Themed Assortments like these, there seems to always be a casting or two that everyone chases — whether its the #Chase piece or not. In the #2019 Hot Wheels #Satin & Chrome series, the assortments came in cases of 24 cars. Of the 24 cars in a case, there is only one chase piece: the #Gotta Go. Unlike the other six series cars which feature satin gray painted bodies with gold-chrome accents, the Gotta Go is painted in a metalflake gold. All seven vehicles do feature the #51 in honor of the Hot Wheels brand’s 51st anniversary. This was done as a follow-up to last year’s 50th Anniversary Black & Gold series — and rumor has it that it will continue next year with Pearl & Chrome for the 52nd.

Unlike last year’s super popular, gold-chrome ’67 Camaro #Chase piece, this #Gotta Go has drawn the ire of some collectors. It could be that they had hoped for another iconic casting, or even another realistic one. For me, the decision was pure comedic gold. The Hot Wheels design team probably had a good chuckle when they envisioned collectors running around town, searching for golden #Toilets. 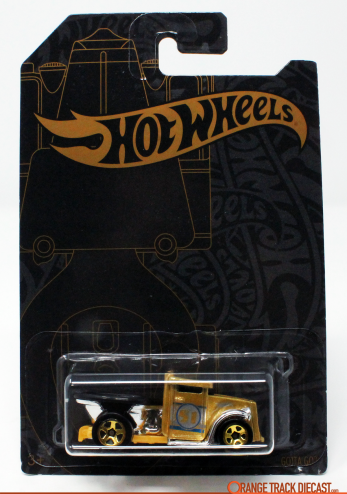 The #Satin & Chrome series is due out this summer, and should be hitting non-big box stores soon. Distribution will be similar to how last year’s “Black & Gold” series was found at a number of grocery, auto, and other specialty stores. There is no doubt, collectors will be chasing the #Gotta Go. I am delighted to have obtained this #Chase piece (along with the rest of the series, thanks to Aaron) as I no longer have that void in my Gotta Go collection — yes, I collect this casting.

Ever since Hot Wheels Designer, Brendon Vetuskey demonstrated the flapping toilet seat by moving the prototype #Gotta Go across a table in front of me at the 2016 Hot Wheels Collectors Convention, I thought this would be a fun casting to collect. You could tell Brendon had a lot of fun designing this one, as you can see that not only through the whimsical nature of the design, but also through the fact that someone at Mattel picked it to be the golden #Chase piece in the #Satin & Chrome series. Happy hunting!