#NASCAR racing liveries on mainline Hot Wheels cars? For a moment in Hot Wheels history, there was a period where mainline Hot Wheels were integrated into the #Hot Wheels Racing line. Kind of a silly concept, huh? Well, when the idea first came about in 1999, the first mainline casting to be integrated was the Tee’d Off golf cart. These were chase pieces limited to 15,000. These also had a tie-in to pro racing as the series of four liveries were known as the Pit Cruisers — team golf carts. A year earlier, we saw the Hot Wheels #Tool Box casting, so it was clear Hot Wheels had meant to do more of a variety in the line, past your common stock cars.

By 2003 however, this simple “chase pit vehicles” concept had developed into a full-fledged crossover of mainline cars into the Hot Wheels Racing line in what can only be described as an attempt to break from stock car monotony on the pegs. So instead of the same castings (ie. Monte Carlo Stocker, Ford Taurus Stocker, etc.) w/ varying levels of modified racing schemes from year to year, we saw some cool — and not-so-cool — castings make the jump and wear these authentic racing liveries. Yeah, they were weird, crazy, and I kind of collected them. Of the several liveries that were repeated, I’m not sure one was seen gracing mainline cars, more than the #5 #Kellogg’s #Frosted Flakes design — a #NASCAR design driven by driver, #Terry Labonte.

As you can see, the #Frosted Flakes livery was so obnoxious, it stood out in the pack, making for some great stock car graphics. Honestly, I think that’s why I liked it so much. It was bright, bold, and featured several of my favorite breakfast cereal mascots. The orange and blue far outweighed the impact of the red, green, yellow and white Corn Flakes design the #Terry Labonte / #5 #Kellogg’s team had a couple years prior.

The #Custom ’69 Chevy Truck showcased today is one of those last 2003 #Hot Wheels Racing releases that came as part of the mainline/racing crossover. By the end of 2003 the idea was abandoned, therefore this was the only racing livery the truck wore — whereas other castings received several liveries.

The Hot Wheels #Custom ’69 Chevy Truck is such a cool casting that I really wonder what other #NASCAR liveries this one would have wore as part of that famed 2003 #Hot Wheels Racing / #Recreational Series. Part of me thinks that the reason the whole mainline-to-racing concept failed is that even despite the demise of the Hot Wheels Racing line altogether, these mainline cars were being sold at a premium price-point — around $3 I believe. Back then, premium cars didn’t sell as well as they do today, and especially ones that did not have #Real Riders. Case-in-point, the #’57 Chevys from 2002 Hot Wheels Racing had them, and they were pretty hard to find. These basic wheel 2003 iterations however, seemed to sit on local pegs a lot longer. Could you imagine if this truck did have some #Real Riders Deep-Dish Wheels on it? … the 2003 Real Rider of choice would have been a vast upgrade on this Chevy truck which already featured a fully-detailed, premium graphics wrap.

I do have to say, despite this line’s wacky concept, these are probably the most premium looking graphics we have seen to date on a Hot Wheels car. I am not sure if these were done via the fusion graphics method which was developed in time for the #Highway 35 World Race line, but they far exceed the quality put forth in the #Pop Culture line with its “dot-matrix” / “inkjet” graphics. 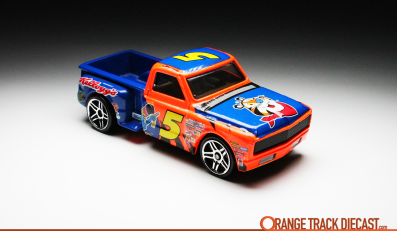 So while the concept of mainline vehicles in fully-wrapped #NASCAR racing liveries may seem a little silly by today’s standards, it really isn’t that far off from what we see going on in the #Pop Culture line. Hot Wheels did manage to make #Real Riders a fundamental asset of that line — which may have very-well-been a learning opportunity from the failed mainline to #Hot Wheels Racing model put in place a decade earlier.