Arguably the best #2017 New Model is the long-overdue, #’95 Madza RX-7. For the last decade or so, collectors have had this popular rotary sports car at the top of their wishlists and this year, the fine folks at Hot Wheels finally obliged as this #First Edition of the casting starting hitting the United States fast and furious. Almost simultaneously at the beginning of September, the dark blue colorway was appearing as part of Hot Wheels “P” cases, while the red colorway was quick to follow as it was exclusive to Kmart Collectors Day cases on September 16th. As if that wasn’t quick enough, the third release of this casting started appearing in October of this year as part of the 2018 Night Burnerz Series in the 2018 “A” case assortments. The 2017 variants are featured here.

What makes this Hot Wheels #’95 Mazda RX-7 such a great casting are the lines. Hot Wheels designer Jun Imai really captured the spirit of the third generation of the RX-7 well — a car typically referred to as the “FD” due to its VIN (“FD3S” for Japan, “JM1FD” for U.S.). If you look closely through those tinted windows, you’ll see this is indeed the U.S. version of the RX-7 as the steering wheel is located on the left side of the vehicle.

As good as the dark blue colorway looks, its the #Kmart Exclusive red colorway that steals the show as it almost seems as though it could be the signature color of the RX-7. Collectors tend to agree as it single-handedly brought some collectors out of the woodwork for the September 16th K-Day — including this collector for the first time in five years. 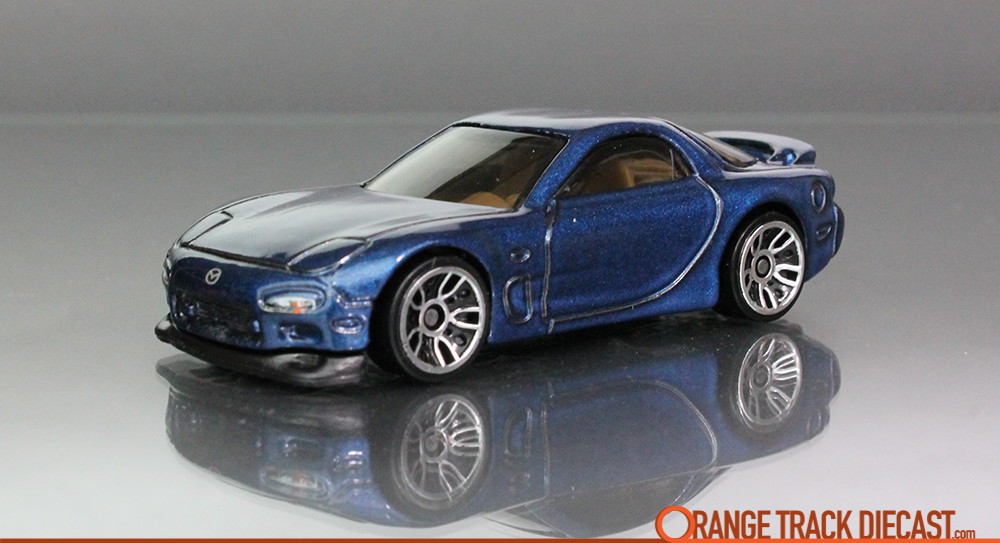 Blue, red, and yellow have been great colors on the Hot Wheels #’95 Mazda RX-7 so far. While black, white, deep emerald green, and in red with Fast & Furious graphics seem inevitable at some point, the clean graphics and paint colors chosen by Hot Wheels graphics designer, Leeway Chang, really set the stage for this casting with its initial #First Edition releases — making it my choice for Hot Wheels casting of the year.