Unlike a lot of other collectors, I never grew up around cool cars. When I started collecting in the mid ’90s, my parents owned a Ford Taurus and a Ford Aerostar, and cars were a method of getting from Point A to Point B. As I got older, my dad and I frequented a couple local cars shows where American muscle cars and hot rods seemed to dominate. Right around that time I started collecting Hot Wheels and I learned that my exposure to the much larger Car Culture spectrum, was rather limited.

The year was 1997 and it was the first year that I decided to collect the whole First Edition set. Local collectors went crazy over the Excavator and the Scorchin’ Scooter, but there was one car that I was drawn to from the second I saw it at a local diecast swap meet, the 1997 First Editions: Mercedes C-Class. It was black, it was clean (with minimal graphics), and those gold #Wire-Spoke/Lace Wheels screamed luxury racer. Needless to say, I bought several.

I’ll be the first to tell you that I know very little about the real car other than its pretty rare (only 500 were made) and that it had ahead-of-its-time style and wicked performance in 1990. Car & Driver did an article about it >> HERE. Knowing that this car was more exotic than most #Exotics only lures me closer to this car.

As far as the Hot Wheels release, the decision to forgo a crazy graphics scheme and focus that tampo power on the headlights, grill and rear taillights / Mercedes badges was a home run as this was certainly the vehicle that caught my eye in #Car Culture / Modern Classics series. 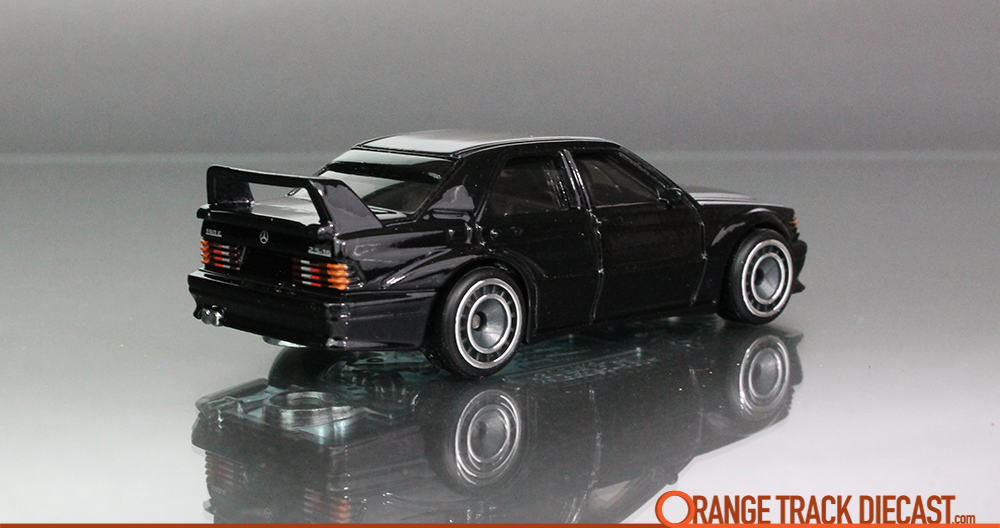 It is merely a coincidence that the #Mercedes-Benz 190E 2.5-16 EVO II came out 20 years after that original black #Mercedes C-Class, however, these two make a great pair. This new casting does tend to dwarf the old C-Class casting, but the detail is far superior in this new one.

It really is a testament to how spectacular these adult Hot Wheels lines have come. This Mercedes is the epitome of what #Car Culture has become as its an incredibly detailed casting that has era-appropriate wheels in the #Real Riders Aero Wheels — not just another mainline casting with special paint and #Real Riders. Sure, those aero wheels have a little more chrome than most would like, but you have to figure this wouldn’t be a Hot Wheels car without a little extra chrome on those dubs.