Is it a distant relative of the Hot Wheels Farbs? Is it Matchbox-inspired? Or is it derived from an old Japanese toy? Well, back in early January, when Hot Wheels designer, Ryu Asada, posted this car on his Instagram account, I immediately thought this could be a modern-day, mainline Farb — the Farbs were characters with wheels essentially.

Before we get too deep into the inspiration for this car, lets give it up for the #’Tooned Series (2017). Back in 2003, when #’Tooned Hot Wheels first surfaced, collectors were outraged. Sure, some dug the fact that this was essentially the Hot Wheels equivalent of the original Muscle Machines brand cars, but I think it is safe to say, many collectors did not want the mainline to be “poisoned” with these cars — yes, that was a real comment from back in the day.

Fast-forward to the present day as ‘Tooned Hot Wheels have been around for 14 years now. Some, like the #’Tooned VW Beetle, Mustang and Camaro Z28 have a collector following. An introduction of a new ‘Tooned series to the mainline seemed logical as those kids from 14 years ago are now adults — adults who collect! Personally, I have heard many people excited to find this year’s series as it seems those collectors like the ‘Tooned ’68 Mustang, ’69 Camaro Z28, ’69 Dodge Charger Daytona, VW Beetle, Lamborghini Countach and this new #Head Starter casting. These are all hits with this niche crowd, and something tells me that the brand-new, #Larry Wood Designed Surf ‘N Turf casting will make heads turn as part of this series. 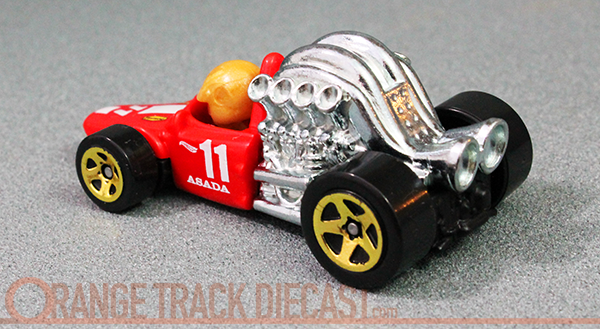 Since all the other popular ‘Tooned cars are based off of real cars and have been around for several years, what makes a brand-new, #Unlicensed Hot Wheels car like the #Head Starter popular? Well, for one, it is based off a vintage Honda race car. Its big hunk of diecast for an engine, and the casting’s metal base, give the car good weight — kind of a value thing in the eye of collectors. But the main reason this car is getting noticed (and bought) by collectors is its nostalgic factor.

While some Hot Wheels nerds like myself will try to tie this casting into the Farbs genre since it has a huge character head sticking out of the interior, the true inspiration for Ryu’s design came from the miniature Japanese toon kits. Ryu confirmed on his Instagram that “since those old school kits are hard to find, we just made [our version]”

One also can’t help but notice some vintage Matchbox inspiration here. The Matchbox Rolamatics were produced in the ’70s and ’80s and featured a lug on one of the wheels that moved a feature on the vehicle. The #Head Starter has a cog on the 5-Spoke Wheels that makes the driver’s head wobble. Also, there were two vehicles from the 1970s Matchbox Superfast line — the Mini Ha Ha and the Flying Bug — that feature a large driver’s head protruding from ‘Tooned-style vehicles.

So while the Head Starter may be a blend of several styles of diecast vehicle, this #First Edition has definitely piqued the interest of collectors. Its looks great in its red, #11 Asada racing scheme and is begging for some track time with the weight of that gigantic, rear engine.

Meet my new HW "Head Starter", tooned style retro racer. It's a HW original, but I'm very excited about this new release. Hmm Honda? I've never heard of it 😆 The driver's head is supposed to bobble.. Hope you guys like it! #hotwheelsofficial #vintage #cartoon