Not sure if the special golden #Chase cars have you buying vehicles from the #Mystery Models baggie cars, but there are certainly a few collectors/profiteers snatching them up looking to make a quick buck. For the most part, I have been leaving the ones I find behind as there really haven’t been that many appealing models — I can name the Droptops Corvette, Rocket Box and Bye Focal II off the top of my head.

The #2017 Hot Wheels #Mystery Models contain a new set of 12 cars — which will surely expand by year’s end — and the golden car in this mix is the #’05 “Tumbler” Batmobile appropriately named “The Dark Knight Tumbler” for this release. Its a far cry from the other releases of this casting so far due to its gold color. Just about every other release of the Tumbler has been either Black, Dark Blue or Beige, with the lone wolf being the chrome release which was a San Diego Comic Con Exclusive back in 2005.

This casting has always been a little funky since the lack of detail makes it look weird. The 1:1 car’s inward-facing wheels were modified to face outwards (most likely for track performance) and the “all-details-molded-into-the-plastic-body” can look weird without it being black or by having no graphical enhancements — like what the Entertainment release had. Still, its a $1 car and its not bad all things considered. Time to place this one with all the other #Batman Hot Wheels in the collection. 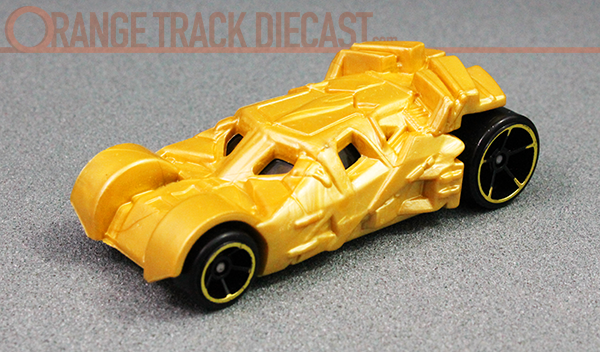