Well, the “Michael Keaton Batmobile” is back in the Hot Wheels mainline appearing as part of the 2017 “F” case assortments. Collectors that will be attending the Kmart Collector’s Day this Saturday will be finding this one in their cases. As a collector of this specific #’89 Batmobile casting, keeping track of all the variants in your head can be tough as the releases blur together due to them being very similar in nature. Case in point, I found the one featured here, along with this Fast Gassin at O’Reilly Auto Parts … and didn’t even realize it was new.

I can’t remember which I noticed first, the #Fast Gassin or the #’89 Batmobile, but upon my double-take I realized that these were indeed 2017 “F” case cars that I hadn’t seen yet. Upon looking more closely at the #Batmobile, I noticed the gray nature of this release — something that hasn’t been done to this casting despite it being released in various formats of black over the last 13 years. Below is a picture of it with the 2004 First Editions: ’89 Batmobile. You can really see the difference when sitting next to that matte black release.

Once you get a release like this out of the packaging and next to some previous releases, its then that you notice all kinds of things that are specific to this release. The anodized gray, aka “gunmetal”, base is a first for this casting. You can also see that as part of the base, it also covers the front turbine, side air-intake, and rear exhaust port … just a nice subtle difference that is unique to this release. Its especially nice given the plastic nature of the body.

Since the #’89 Batmobile is a licensed #TV & Movie Car, there is only so much the graphic designers can do to change it up — it still needs to resemble the #Batmobile from Batman (1989) and Batman Returns (1992). Its nice that whoever designed the graphics (of lack there of) for this release strayed away from adding another set of flames, as that is what has been done in the past. With the absence of graphics, it did allow for the painting of the rear taillights which is definitely a nice touch!

As I mentioned earlier, this #Batman Series (2017) #’89 Batmobile is starting to show up in the “F” case assortments for 2017. It will be interesting to see if we get a colorway on this one as the body will essentially have to be another color. For now, lets just enjoy the fact that this is the first release of this casting in gray, and first time the base has had this rather unique gunmetal finish. 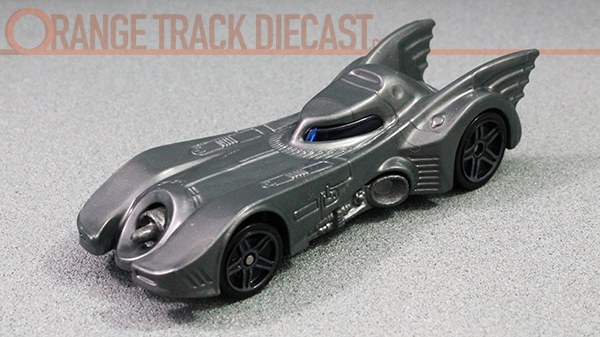 For more pictures of your favorite Hot Wheels cars, check out @orangetrackdiecast on Instagram!