The two week jump that Target got to distribute the Hot Wheels #Car Culture / Air-Cooled series is over and collectors have started finding this series at other retailers. While it seems the VWs are a popular commodity as I haven’t seen the Beetle and the Squareback yet, this #VW seems to be left behind in most instances — and maybe this is completely contingent on where I live. See, if I lived in say, Brazil … I can almost guarantee that this popular Brazilian #Rally Car would be hoarded. Really though, its surprising that I am finding this one left behind given the popularity of the other two VWs and the fact that it pairs well with the #Target Exclusive, #Retro Style Series release from last year — which is actually being re-released soon.

While to some, the graphics on this release of the #Volkswagen SP2 may seem busy, a closer look at them reveals a hidden Brazilian flag. The green in the tampo design is actually the flag itself with the yellow negative space serving as the yellow diamond in the flag’s center. Hiding underneath the #16 on the sides is the blue circle/globe that is found in the middle of the yellow diamond on the flag. This is just another brilliant design from the mind of Hot Wheels Graphic Designer, Steve “Van” Vandervate, who primarily designs graphics for the collectors lines such as #Car Culture and the #RLC.

This is also one of many #Cars featuring names of Mattel Employees as the black stripes with yellow reverse type read “M. JONES”. Mark Jones is currently a Hot Wheels Designer, however, he is not the designer of this casting. That honor belongs to another Designer in Rob Matthes. Rob works primarily in tracks and playsets now. Van decided to honor Mark Jones with this deco as it was Mark’s 30th anniversary in 2016, hence the #16 that adorns this car. 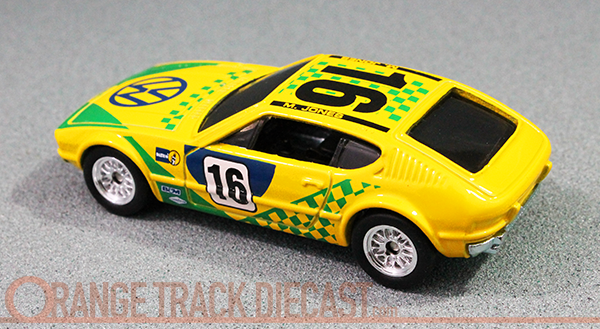 Another noteworthy tidbit of information is that since this #Volkswagen SP2 is part of the #Car Culture / Air-Cooled series, it is part of the first mix to be produced at the Hot Wheels Plant in Thailand — previous #Car Culture mixes were produced at the plant in Malaysia. It is believed the change was made to produce this collector-oriented line with the superior tampo quality it deserves.

For more photos of your favorite Hot Wheels cars, check out @orangetrackdiecast on Instagram!

Pretty stoked I was able to pull off the #reflection in this photo of the @hotwheelsofficial #volkswagensp2 which is out now as part of the #carculture #aircooled segment. Pair that with the #retrostyleseries release from last year and you have a #winningpair. #hotwheels #hotwheelspics #hotwheelsdaily #diecastphotography #orangetrackdiecast #rallycar