The Hot Wheels #Fast Gassin is back for 2017, however, it is in the same series as last year: the #HW City Works Series. While many collectors often dislike a casting appearing in the same segment series over and over again, this fresh Union 76 design really saves the day. Until now, this #Unlicensed Hot Wheels #Tanker has appeared with non-licensed graphics — meaning its appeared with generic, fictitious fuel companies. The blue and orange color scheme of the #Union 76 brand is one of the most recognizable in advertising history and looks awesome on this fantasy Hot Wheels truck.

If you remember back to last year, it was the first time the #Fast Gassin casting sat on 2 axles (oppose to the 3 axles it had in previous releases). While that new “retooled” version of the casting is clearly here to stay, we do have another first on this casting — its the first time its worn the #Steelie 8-Spoke Wheels. Introduced just this year, these new wheels have only been seen on a handful of #2017 Hot Wheels so far. This is officially the first vehicle that I have found them on.

Speaking of wheels, there looks to be a wheel variation on this release already. Collectors have reported that they have been finding it with your classic #5-Spoke Wheels as well. Its unclear which will be harder to find at this point, but I have to admit that the steelies really give this truck a solid look — and are the better of the two options. 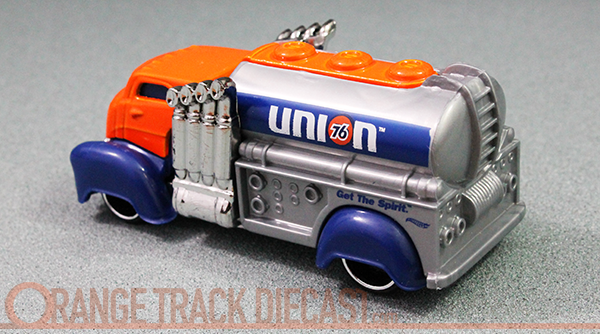 This #Union 76 release of the #Fast Gassin is definitely one of my surprise favorites of this young year. Between the licensed paint scheme and the new wheels, the graphic designer nailed this one. I don’t buy most releases of the Fast Gassin, but if succeeding releases look as cool as this, I may have to.

It will be interesting to see how collectors respond to this one. I can see it finding its way into many collections of car guys who only collect more realistic cars. Whether or not that is the end result, we will have to see. This one is appearing now as part of the #2017 Hot Wheels “F” case assortments.

For more images of your favorite Hot Wheels vehicles, check out the @orangetrackdiecast Instagram!