The Hot Wheels #Car Culture / Air-Cooled series hit stores this week, with the bulk of collectors finding them yesterday at their local Target stores — myself included. While not exclusive to Target, they certainly have the jump on the other retail stores with this line for 2017.

The second wave/series for 2017 is the Air-Cooled series which features five metal/metal cars wearing #Real Riders. While some collectors may be eagerly awaiting to add these air-cooled engine automobiles to their collection, I was eagerly awaiting the first wave/series in the #Car Culture line to be made at the Hot Wheels plant in Thailand. Why you ask? Well, the Thailand plant is known to have a far superior tampo machine to the Malaysia plant. This means, the graphics on the cars should be of higher quality and should no longer come with the “weathered look” while still in the packaging. I have to say, after looking at the #’60s Fiat 500D Modificado here, the graphics are up to the high-level reputation of the Thailand plant that we have come to expect. 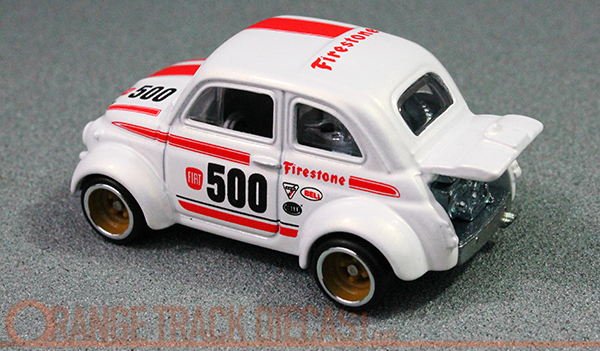 Speaking of great detail, how about that air-cooled rear engine? As you can see, the rear engine cover is cast in the upwards position to permanently reveal the engine. This would have been way more cool if it was cast as an #Opening Feature, but its still pretty cool as-is … just not “as cool” as it could have been. Looking through the rear window, you see a dual-hose cold-air intake system that is cast as part of the engine. The rear side windows have indentations for that cold air intake. Very cool, fine detail if you ask me!

If you’re sitting there saying, “why haven’t I noticed all this on (or seen) this casting before?” Well, that is because this is a brand-new casting, what I like to refer as the #First Edition. First Editions are usually cool because the Hot Wheels designers usually design the graphics themselves, but given that this was a #Car Culture release, Hot Wheels graphic designer Steve Vandervate took care of this one. …Can you say, “nailed it”?

The last little tidbit of information regarding this release is that this is the first casting/release to wear the micro #Real Riders 4-Spoke Wheels. These should be incredibly popular with the Hot Wheels customizers as there are very few #Real Riders that are made for castings that wear this small of a wheel.

For more photos of your favorite Hot Wheels cars, check out the @orangetrackdiecast Instagram page.