With kind of a lackluster second wave of the 2017 #Red Edition series vehicles hitting Targets soon, its hard not to look back at the first wave Red Edition vehicles which were right on the spot.

These #Red Edition cars are part of their own segment series in the Hot Wheels mainline — which is a #Target Exclusive. They are unique red & white colorways of existing 2017 mainline vehicles.

A close-up of the packaging on one of the 2017 Target Exclusive, Red Edition series vehicles.

The #’55 Chevy Bel Air Gasser from this series mirrors the graphics of the 2017 HW Flames release, with one omission: there is no Hot Wheels logo on the trunk on this one. Just like the other releases of this casting, collectors and profiteers alike were seeking this one out. Because it was a #Target Exclusive, many collectors were using a site called brickseek.com, and entering Target’s DPCI# for the inventory status on the shippers. That number was the same as the mainline number, however, these came in red sidekicks with 5-packs along the bottom. The other mainline vehicles included with the #Red Edition vehicles (in the sidekick) were also part of the 2017 mainline “C” case assortment.

This is such a great release and if you have the 2017 HW Flames ’55 Chevy Bel Air Gassers, they all make for a great trio. 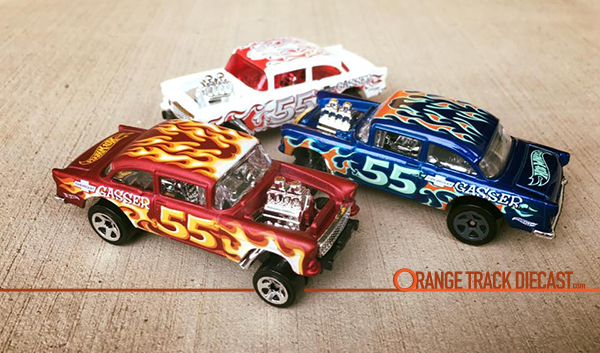