There are many reasons to give “thanks” this year, especially in the Hot Wheels world, and this is one of them. Back in early September, it was revealed that the #’66 Batmobile would be the only Mattel-made #Convention Vehicle for the 9th Annual Mexico Hot Wheels Collectors Convention. Held November 10-13, 2016 in Mexico City, this car was available at the convention and on the convention web site starting on October 1st and only took a few weeks for this run of 4,000 pieces to sell out.  NOTE: An undetermined number were set aside for convention goers. 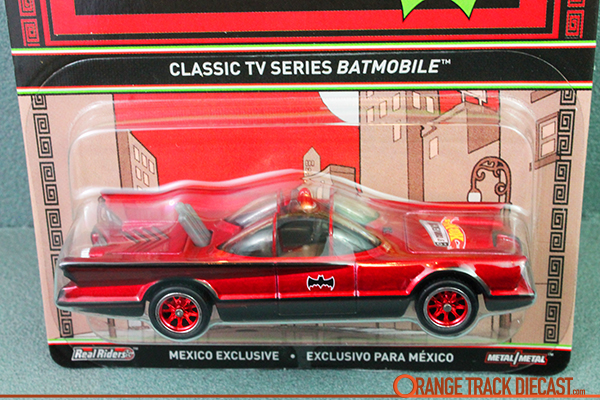 As you can see, this is a beautiful piece and another stellar rendition of the ’66 Batmobile. Collectors initially scoffed at the idea of a red #Batmobile and the price point of $40 USD + $11.99 in shipping ($6.99 was suppose to be return, but hasn’t yet) couldn’t have helped. However, as it was mentioned, this car sold out so clearly collectors & resellers weren’t bothered too much by those two perceived negatives.

Most likely it was the popularity of the Hot Wheels ’66 Batmobile casting that drove sales — added to the fact that the 26th Annual Hot Wheels Collectors Convention release in gold-chrome currently sells for north of $200. Its easy to understand if profiteers saw dollar signs in their eyes, or at worse, figured they would be able to make a few bucks off of it on the secondary market.

Ultimately, despite the large price tag, this is one #’66 Batmobile release that many were glad they were on the buying side of the fence as its an incredibly detailed, metal/metal piece — with #Real Riders to boot! Check out the aluminum-esque front & rear grills, the red-painted seat inserts, and red siren with chrome trim on top of the vehicle. All of these fine details will make this a show piece in my collection for years to come. I am very thankful that I decided to purchase this one. Hopefully you were able to score one as well.