The Hot Wheels Car Culture line has been a huge hit with collectors thus far. Each wave has given us a new story as these 5-car series — Japan Historics, Euro Style, Trucks & Track Day — are very diverse bringing in all walks of collectors and have had a nice selection of vehicles. The main part of this visual story is delivered through the line’s packaging which we now know is the work of Senior Packaging Designer, Julian Koiles. It was his goal, when creating the art for this line, to have the packaging tell the story, something he is very passionate about. 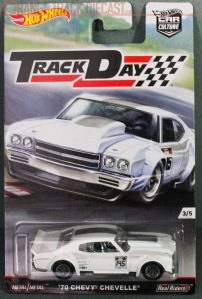 The only downside to really cool packaging (when you’re an opener) is having to rip it apart to get the vehicle out. Alas, this #’70 Chevy Chevelle SS has been liberated and will soon be paired with the other releases of it in my collection. Being that this is the 4th series release of it in as many years, this is the first time we have seen it in a premium line therefore its also the first time the casting has worn a metal base.

As a collector of this Hot Wheels ’70 Chevy Chevelle Racer casting, I hope this is the start of many more premium releases of it. Since we now know it has a metal-based version, it definitely opens the door for more. The graphics and paint on this release are very subtle, but clean, however the only thing this release is lacking is detailed headlights/taillights, something we hope isn’t omitted in future premium releases.

Designed by Jun Imai and first released in 2013, this “racer” version of the ’70 Chevelle is actually the 5th ’70 Chevelle casting by Hot Wheels. Unlike three of the others, this one barely resembles the others as the ’70 Chevelle SS Convertible and SS Express are both based off of the original, Phil Riehlman designed, ’70 Chevelle SS casting from 1999. Whereas, this and the ’70 Chevelle SS Wagon casting are built on their own plateaus — even though the wagon was also done by Phil Riehlman. Be on the lookout for this white-hot, metal/metal release (with #Real Riders of course), which is starting to show up in stores now. Can’t wait? Check out an online retailer such as Grana Toys to get yours today!