Just about every year for the last decade, Hot Wheels has made their presence known at the grandaddy of all comic cons, the San Diego Comic Con (SDCC). This year, they showed up with all kinds of #Pop Culture and #Hot Wheels Characters releases but one of their larger unveils was the announcement of the Hot Wheels #Carships line. In fact, there was such a push to announce the line that Hot Wheels built a full-size, 1:1 scale X-Wing Fighter (carship) for display at the SDCC and even allowed a select few to sit inside (see the video at the bottom of the article).

Capping off this huge arrival of the #Carships line was a #SDCC Exclusive set that was a Hot Wheels style diorama that recreated the famous “Trench Run Scene” from Star Wars: A New Hope (1977). This 4-car set featured the X-Wing Fighter outrunning three Tie Fighters with the one in the middle being a special Darth Vader Tie Fighter casting. This set is full of lights and sounds. It retailed for $50 at the show, with a select few being sold on HotWheelsCollectors.com after the show for the same price. Below is a video of the set in action.

These are the first #Carships to be made so you definitely have the #First Edition of the X-Wing Fighter here in this set. But, by the looks of it, the Carships aren’t far behind. Being introduced as a #SDCC Exclusive is quite an entrance for any casting as these releases are about as premium as they come. The detail on this carship is amazing, especially with the weathered look. Heck, the carships in this set even wear #Real Riders tires because, you’re probably not going to want to race these — save that for the ones you find at retail.

Dmitriy Shakhmatov is quickly becoming one of my favorite Hot Wheels designers. He designed my #1 2016 New Model, the #Cruise Bruiser, and he designed this brand-new X-Wing Fighter casting as well. He is even interviewed next to the real one (at SDCC) in the video at the bottom of the page. With the Hot Wheels #Carships line coming soon to retailers, you can bet you’ll be seeing more of the X-Wing Fighter and the other #Carships in this line here at Orange Track Diecast.

If you’re a fan of Star Wars and/or the X-Wing, check out the Star Wars Series: Enforcer from 2015. We reviewed it earlier this year and even likened it to an actual X-Wing as that is what we believe it was designed to look like. 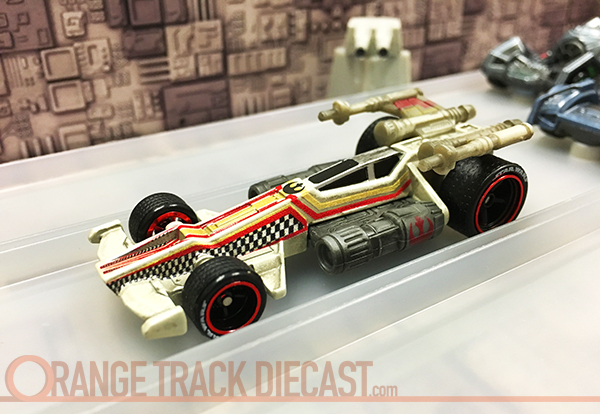