When Hot Wheels released the Bone Shaker in 2006, collectors went nuts over the heavily modified Model A with a skull on the front. It instantly became one of the most popular Hot Wheels of all time and became the face of the Hot Wheels brand for years to come. Needless to say that Larry Wood was once again able to capture lightning in a bottle as he created yet another casting that made even the adults dream of speed, power and performance. Since then, it seems as though the Bone Shaker has been modified a million times over as some iteration of its likeness appears in just about every Hot Wheels line.

Kickin’ cousin of the Bone Shaker, the Bone Speeder is optimized for the tarmac track. An extreme low-ride adds stability while front and rear wings supply the corner-hugging down-force. Complete the menacing mix with a powerful V8 to scare up some track-rattlin’ victories.

This aero-dynamic wedge carries over the Bone Shaker’s signature cab with a solo seat positioned in the middle similar to that of an open-wheel roadster. It has a huge wing on the back (can’t miss it) and a rear-mounted engine complete with dual exhaust stacks which look great on this casting and only completes that low, menacing look. One glaring omission though — NO skull on the front of the Bone Speeder! Granted its a small area, it is disappointing as every iteration of the Bone Shaker likeness has carried this signature of the Bone Shaker.  (NOTE: The seat is part of the plastic base and the chrome parts of the interior are one piece with the rear engine, exhaust stacks and front grill.)

There is one thing for sure, the Bone Speeder is designed for speed on the orange track! With its large Open-Hole 5-Spoke (OH5) Wheels, and low down-force, this car rides as smooth as any I have seen as of late. While I haven’t taken it to the Super 6-Lane Raceway yet for a test-run, this car would barely sit still on my desk as it was ready to roll (right off the desk of course).

Just like the Night Shifter we showcased yesterday, the Bone Speeder of one of four #2016 New Models to make its debut in the #HW Race Team (2016) series. It will be interesting to see how the graphics on future releases stack up, but for now, you know I am digging the #Hot Wheels Race Team deco! 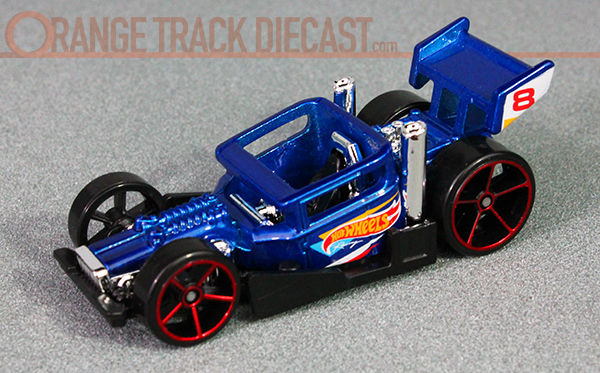