The #2020 Hot Wheels have started to appear, but before we totally move on from 2019, we need to look at the last #2019 New Model: the #Mod Rod. This modern, modified hot rod — hence the name “Mod Rod” — is a super slick Hot Wheels original design by Dmitriy Shakhmatov. It just started appearing in the last case code for 2019, the “Q” case assortment; and will carry over to 2020 in the “A” case assortment. 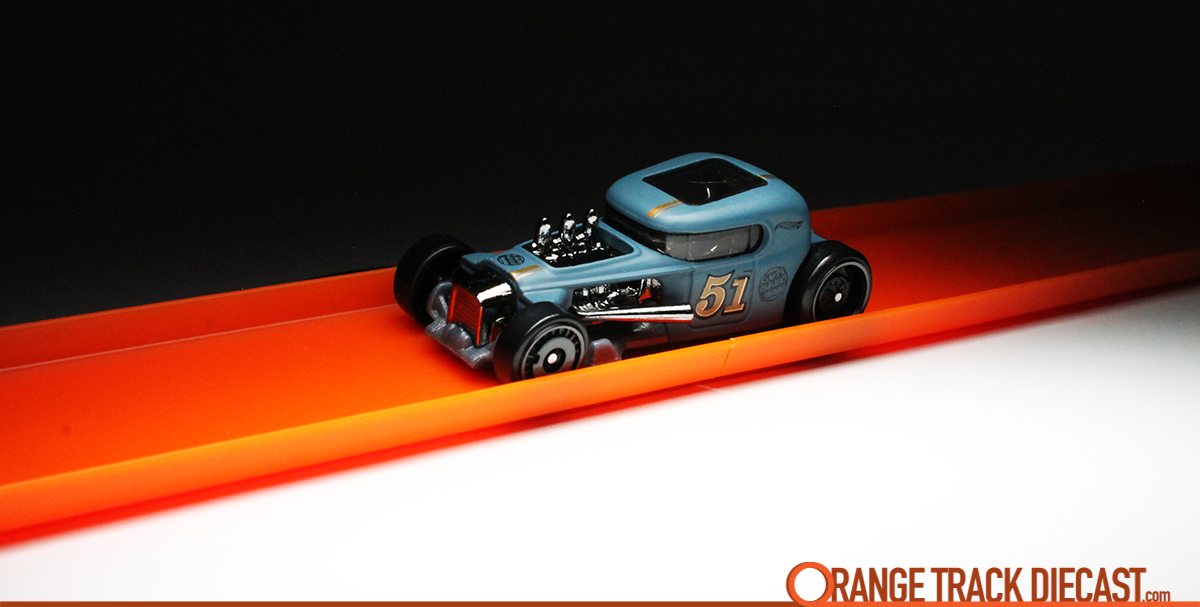 So what’s not to like about this #First Edition of the #Mod Rod? Everything about it is edgy: from its aggressive casting details to its moody blue paint. This 2019 #Factory Fresh series release is probably the furthest thing from being “factory fresh” as this custom hot rod is certainly not “factory”. But yeah, that paint, let’s start there. This one wears a #51 #Gumball 3000 livery that is unlike any color scheme we have seen on a Hot Wheels car before. The moody matte blue is a perfect contrast to the metalflake gold tampos — AND, it’s a livery that we will actually see again. This is car #1 in an unofficial 3-car set that will be released over the next year or so. The Erikenstein Rod showed by Hot Wheels Designer, Eric Han at the latest convention; will be #2 with a #52 on its sides.

So what’s not to like about the Hot Wheels #Mod Rod??? I have been arguing with myself over the coolest feature of this casting and simply cannot decide on just one. The aggressively raked stance is pretty cool with the meaty #Steelie 8-Spoke Wheels in the back and (more) slim #Aero Disc Wheels in the front. Even the overhanging roof that eliminates the need for any A-pillars, creating a panoramic front windshield is a cool design element…

Perhaps it is the fact that the #Mod Rod just looks fast! There are three massive spikes coming out of the V6 engine that is fed large amounts of cool air through a streamline billet grille. The cone-shaped, side-mounted exhaust comes right out of the engine like a cannon that is ready to fire. Oh, and in the rear, there is an elongated porthole window — if I’ve ever seen one — looking at everyone in its dust. Below that is a trunk — think leather and used in 1920 for an affluent family vacation — of a trunk (modern car) that is held shut by two leather straps.

Basically, the #Mod Rod screams classic Hot Wheels Design which is always cool to see from a young(er) designer in Dima. It inspired me to bring out two friends… the first of which being the similarly-named, Mob Rod which came out in 2010. Yeah, it was a modern design, but it came from redline-era & classic fantasy car designer, Tom Daniel. Tom designed the Red Baron, S’Cool Bus and Sand Crab which should say enough; but his ability to come back and work with Hot Wheels to design the Mob Rod speaks volumes. It was also one of the cooler moments in the history of the Red Line Club.

In every which way that the Mob Rod represents classic gangster though, the #Mod Rod represents modern-day rebel. The Mod Rod is totally something you could expect to see pull up at one of the Hot Wheels Legends events. It is definitely built, not bought furthering the head-scratching notion as to why this is in the Factory Fresh series for 2019. Hot Wheels factory fresh? Yes! Automotive factory fresh? No.

That leads me to the other classic Hot Wheels design it reminds me of: the #Bone Shaker. Yes, I know the Bone Shaker isn’t a classic design in terms of age, but its designer — Mr. Hot Wheels, Larry Wood — is as classic as they come. From the moment the Bone Shaker was released in 2006, it became a mainstay on all collector-favorite lists — an instant classic!

If you think the #Bone Shaker has attitude with its aggressive stance, simply look at the head-to-head above and tell me the #Mod Rod doesn’t look more fierce. It is not to take anything away from the Bone Shaker as there is a reason why its an all-time collector favorite. Its to show how nice of a design this new Mod Rod is — the new #Hot Rod on the block.

Will the #Mod Rod ever reach #Bone Shaker status? Probably not as those are some large shoes to fill. The Bone Shaker was met immediately with collector acclaim while the buzz around the Mod Rod has already simmered as collectors look ahead to 2020. Still, I think collectors will respond well to the Mod Rod in the years to come as its too great of a casting to simply ignore. I have already made up my mind that I will collect this casting throughout the years to come. How about you? What are your thoughts on this badass design?