If you’re like me, the annual Hot Wheels Collectors Convention in Los Angeles wears you out. Its several days of non-stop buying, selling, trading, events, and talking diecast. Every year, I have to remind myself to eat, sleep and even drink. Time seems to cease as your life is put on hold to scour the hotel rooms for the next best deal. This year was my 4th consecutive LA convention, and while I seemingly did better at giving my body the nutrition it needed, I came home beyond exhausted. With that said, it was TOTALLY WORTH IT!

This year, I made 1,000 OTD trading cards to pass out and through that, I got to meet soooo many awesome collectors — many of which read OTD daily — which is very humbling. I got to catch up with old friends. I also had a couple 1-on-1 chats with the designers and other Mattel staff. I learned much more about the cars we all love, from history to the modern process, and I hope to apply that knowledge to the upcoming articles that I write.

Your experience may have differed from mine as I saw many different collectors from all walks of life, enjoying the convention in various ways. Some were there just to sell, some were there just to buy. Some were there to attend every event Collectors Events Unlimited (CEU) put on, and others were fine just sitting in the hotel lobby conversing. Whatever your reason for attending, it seems as though all collectors do share one aspect in common… the purchasing of souvenir cars!

The souvenir cars have been a staple of the Hot Wheels conventions for a long time. They are also the biggest mover of people at the convention. Collectors will wait in line for hours, just to be the first to get their hands on the latest car. Typically, there are several that are produced by Mattel, and sold by CEU. Two were sold in the souvenir room at the start of the convention, while there was another given away at the Larry Wood dinner on Thursday. Friday, the pink RLC “party” car was sold in the morning — since there is no longer an RLC Party — and lastly, finale attendees received one last vehicle at the doors of the finale event Saturday night.

In addition to that, there are also Code 3 cars which are often produced by a well-known customizer, and given-away by the Hot Wheels Newsletter, and also sold for charity by CEU. There are even “RAOK” cars (Random Acts Of Kindness) which collectors will make and pass out to other attendees. I love getting all three types, but for the showcase down below, we are just going to focus on the five Mattel-made cars for this convention.

The #Nissan Skyline GT-R (R34) was the first of three convention cars — the dinner car and pink RLC car are not numbered. It was limited to 5,000 pieces, all of which reportedly sold-out before Sunday’s toy show that was open to the public. It marks the first time the newly-tooled, premium version of the R34 (with opening hood) was released, with the second being sold through the RLC next month.

The car itself came in “Lightning Yellow” which is a rare color of the actual 1:1 BNR34. Since this is currently the most limited R34 Hot Wheels has produced, its a cool homage to the limited nature of the actual car. The car is free of any additional graphics beyond the convention text on the top of the rear spoiler, and the California license plate reads, “LA SKLN”. 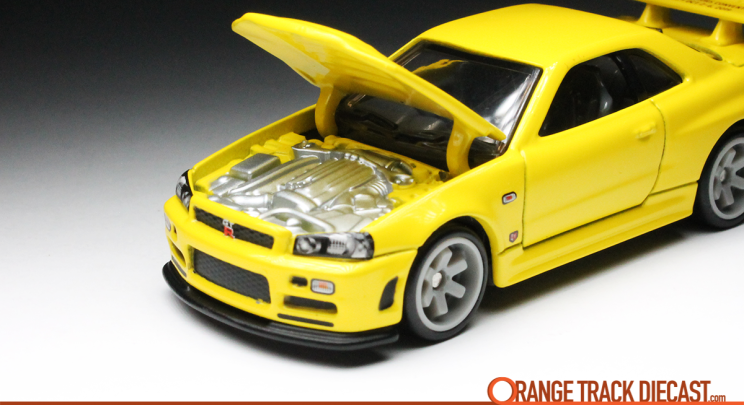 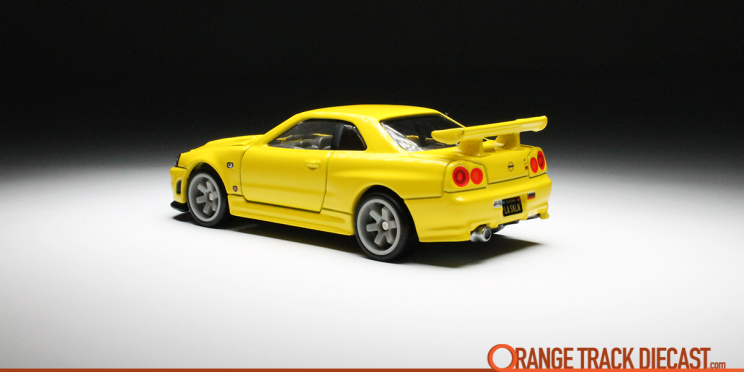 With the Nationals convention (spring) being held outside of Chicago, and the Collectors convention (fall) in Los Angeles, the perfect theme for this year’s conventions was Route 66. Before there was the interstate system, it was the way to travel from Chicago to Los Angeles. It’s by far the most popular route in all of the United States and it has been synonymous with car culture over the years. CEU did a great job selecting a sampling of cars you could expect to see driving the famous route.

The Hot Wheels #Custom ’62 Chevy Truck is one truck you could expect to see headed to the beach as it has a surfboard in the back. This release even carries its #Union 76 livery over to its longboard. Speaking of that 76 deco, this was a livery within a theme as the Volkswagen Drag Bus from the Chicago Nationals also had the Union 76 livery. This truck looks are though it could be straight out of #Car Culture as its full-deco, premium design which was perfect for a casting that made its #Convention Vehicle debut. The consensus among collectors at the convention seemed overwhelmingly positive as I didn’t hear anyone say they disliked this one, and many admitted to purchasing the max. 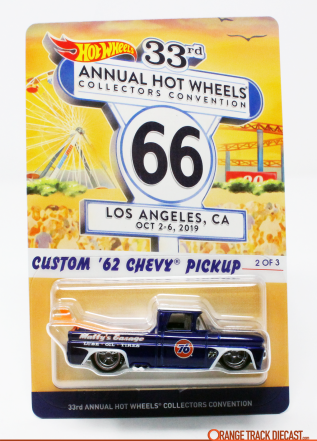 How do you honor the man dubbed, “Mr. Hot Wheels” who has designed hundreds of castings over the last 50 years, with simply one car??? Short answer: You can’t. The dinner honoree at this year’s collectors convention was Larry Wood — as if you didn’t already know. It was certainly a great night to be a part of as Larry is a legend in Hot Wheels design, and has been instrumental in all facets of collecting — he and Mike Strauss pretty much identified the “collector” in the ’80s and was on the team that founded hotwheelscollectors.com. To pick a casting to honor Larry must have been a daunting task as I would find it hard to believe that any one person did so. What was ultimately decided on though was the #Ramblin’ Wrecker — a classic Hot Wheels casting from the ’70s that has not been seen since 2011.

Perhaps one of the more memorable castings that #Larry Wood Designed as the first release of it in 1975 had Larry Wood’s actual phone number on it. On Thursday night, many nostalgic collectors recalled calling that number as kids — including Carl Pomponio, the MC for the dinner event.

This release of the #Ramblin’ Wrecker came in all gold, which of course is the perfect color for 50 years. The gold almost resembles a gold foil in appearance which will likely be generalized as #Spectraflame Paint by most collectors. It was definitely cool to see a vintage casting in the Ramblin’ Wrecker return for this special night. Rumor also circulated that Larry is now officially retired — meaning no more castings — which by my calculations means that the Tur-Bone Charged was officially his last Hot Wheels design. That’s probably news that no collector wants to hear. Either way, I was grateful to have just been in attendance, hearing the many stories about Larry and his 50 years in Hot Wheels design. Bonus points to former Hot Wheels Designer, Howard Rees for doing his best to turn it into a roast. 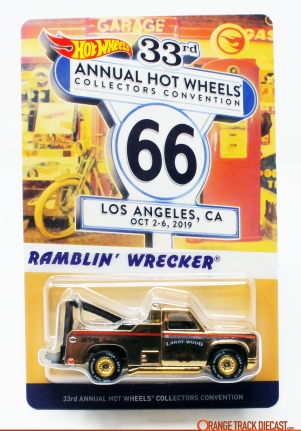 The underlying symmetry between conventions this year continued with the RLC Pink “Party” cars — even though neither Chicago, nor LA conventions had an actual RLC party — which was kind of symmetry in itself. Both conventions featured an O16 casting: #Custom Corvette for Chicago, and #Custom Volkswagen for LA. The Custom Volkswagen was actually a #Convention Vehicle five years ago at the 28th Annual Collectors Convention but has since been retooled to avoid any chance of that engine facing backward again. The retool actually went beyond that as the casting was redesigned to better replicate the original for the O16 Display Set that was offered through the RLC. Nostalgic collectors welcomed the sight of the neo-classic wheels as releases with those have been fewer and far between in the Red Line Club. 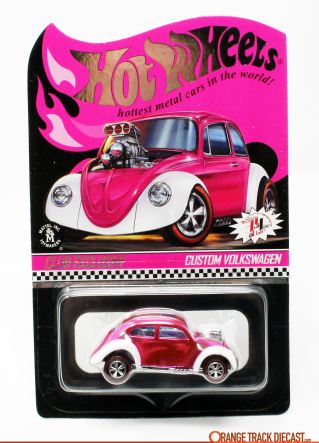 The #’55 Chevy Panel capped off convention week as it was handed out at the finale. It’s a casting that has served as a collector favorite since it made its debut in 2006. This time it serves as the Route 66 Hiway Patrol & Pursuit as that is literally emblazoned on its sides. Besides the police deco, perhaps collectors are most intrigued by what lies within the casting — the return of the motorcycle. Collectors had been missing it since the bike was removed (and the door was sealed shut) for its last several #Pop Culture releases. Fortunately, the “more premium” of the two premium tools of the casting still exists, and the bike was able to emphasize the “Pursuit” part of Hiway Patrol & Pursuit. The really cool part of the motorcycle coming back to this release of the ’55 Chevy Panel is that it was able to have “full-deco” itself. It even carries over the logo that is on the outside of the truck.

Deco-wise, there are three details that really put this truck over the top — at least for me. One, instead of “POLICE” being backward on the front of the hood, “FINALE” is there as a nod to the event. The second would be that there is one red light, and one blue light on the front of the vehicle. It may not be much, but the addition of siren red & blue provides a slight color splash to the front of this monotone vehicle. Lastly, it was cool to see long-time convention volunteer, Joe Alvarado honored on the sides of the #’55 Chevy Panel as it says, “Sgt. ALVARADO” just above the Route 66 Hiway Patrol logo on the doors. Even better is that he didn’t know it said that, and that the reveal to him was caught on camera by Hot Wheels TV. 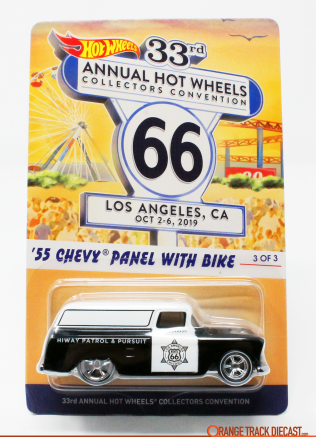 This release of the #’55 Chevy Panel should be a cool piece for years to come — I’ve even already contemplated picking up another. Obviously, the deco is super cool, and a perfect wrap to this year’s conventions. This piece is also the most limited of the convention cars as only 3,500 pieces were produced. Less than 2,000 were handed out at the convention, meaning the remaining 1,500 or so will actually be stripped down and used for future event cars by CEU.

I am so thankful to have been able to attend the convention this year. The cars are great, but it really is the people that make it that much more special. I’ve probably had more conversations about Hot Wheels in the last week than I’ve had in 3/4 of my life. It was nice to have that, but its also been great to be back home with my family. I have had my time to decompress so its time to turn an eye to 2020. Mattel provided so many cool sneaks at the convention that make me incredibly anxious for 2020. For all you headed to the 2020 Hot Wheels Nationals in Charlotte, its only six months away, so you’d better start preparing now, as April will be here before we know it. Cheers!