Leave it to Hot Wheels to take the #’69 Nissan Skyline Van, and wrap it in nostalgic #X-Men graphics. This car ranks among the best #JDM castings that Hot Wheels has to offer, and they slapped some American super-hero comic by #Marvel on it. Thats how Hot Wheels collectors that are car enthusiasts see it. So why did Hot Wheels even concoct something like this?

If there is one thing Hot Wheels has accomplished in the last ten years, its the ability to really expand its collector base. Case in point: look at RLC memberships. Those sold out at an all-time high — IN A COUPLE DAYS! Yes, Hot Wheels collecting is at an all time high. Where does that influx of people come from? Well, the brand has garnered the attention of another base — outside of general car enthusiasts. What I overgeneralize as the “pop culture crowd” is a base of consumers that may care less about cars, but has an affinity for all things TV, movies, video games and comics. 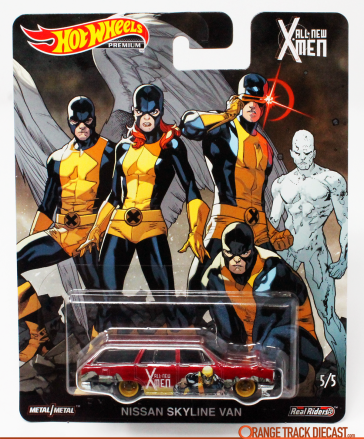 Appropriately so, the #’69 Nissan Skyline Van is probably the nicest vehicle in the set; and given the acclaim this casting received last year when it made its debut in #Car Culture, Hot Wheels is banking on it being the car collectors seek out. The collectors that side more on the car enthusiast side are definitely more inclined to pick up this release because of the casting whereas there are plenty of #X-Men fans that would love to get their hands on all five cars from this X-Men #Pop Culture series. Maybe even a few of them will be turned on to Hot Wheels Car Culture… that would be a success in the eyes of Mattel.

If you are one of said #X-Men fans and this release is what brought you over to the Hot Wheels side of things, welcome!

On all #Pop Culture releases, make sure to check the opposing side of the vehicle as you’ll often be greeted by “variant artwork” — something that comic book fans should be familiar with. This release of the #’69 Nissan Skyline Van happens to have four of the All-New X-Men on one side, versus some Wolverine “lone wolf” action on the other side.

Also, this is the only vehicle in the 5-car series to wear these RR4SP Wheels, which is odd considering they make a perfect “X” in the inside. SEARCH: X-Men RX-8 and you’ll see it is the perfect wheel choice for this series. Maybe it was an oversight on behalf of the design team, or maybe it was physically impossible for the RR4SP wheels to appear on the other vehicles, but my only suggestion would have been for all five cars to wear them. This is officially the third release of the #’69 Nissan Skyline Van, and I’ll be honest: if it weren’t for the #Real Riders 4-Spoke Wheels on it, I probably wouldn’t have bought it. However, now that I have put all three releases of this casting together, I am more inclined to keep going on this casting collection. Personally, I am not a huge fan of #Station Wagons, even though this is certainly one of the coolest. Either way, I wouldn’t expect this one to last long on the pegs. There is a reason why this one is coming three to a case: Mattel expects it to be a picked up by multiple genres of collectors.

The #Pop Culture / X-Men series is set to hit mass retail soon. The series has already begun trickling in at Target, so if its on your radar, make sure to check there first.