Recently I was able to grab the missing piece in my Hot Wheels #’52 Hudson Hornet collection: the 2012 Boulevard release. I celebrated by liberating the collection from their little cardboard prisons, and even made a post about it. While doing so, there was one release that I couldn’t stop staring at. The 2012 #RLC Rewards release came in #Spectraflame Olive with what I heard best described as a “creamy avocado” roof. Its quite possible that the allure came from it being the shiniest car in the collection, or maybe there is just more to the story…

The 2012 #RLC Rewards series consisted of two Hot Wheels that were made to order: this #’52 Hudson Hornet and the Volkswagen Drag Truck in #Hot Wheels Race Team attire. Having only enough points for one car that year, I opted for the VW Drag Truck because a.) I collect the Race Team, and b.) I felt like I could scoop up the Hudson without paying a premium down the road. Since these two cars were made-to-order, you can tell that the majority of collectors opted for the Drag Truck as well since the quantity produced was 6,655 pieces, whereas the Hudson only had a quantity of 4,350 pieces.

Time had passed — like 6 or so years — and I had come across one on a secondary sales site for under $20-shipped. Considering that is the retail price of HWC/RLC cars today, I figured it was a great deal for the car that I thought — even more so today — was the better of the two. 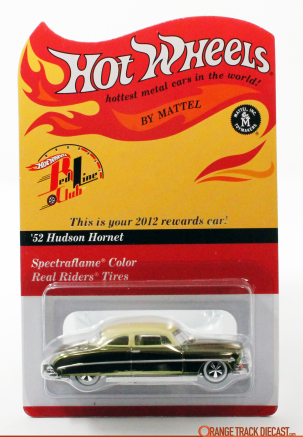 All seven releases of the Hot Wheels ’52 Hudson Hornet

I kind of doubt that we will ever see the #’52 Hudson Hornet produced as a HWC/RLC release again. It just seems so far from what the club has produced in the past and the direction its headed for in the future. But who knows, all it really takes is for one person on the Hot Wheels Design or Marketing Team to make a case for it, and production becomes a reality — which is how this one came about in the first place.

I asked Gary “HWCGary” Barnum about how this was chosen to become a rewards car. It had no prior history, in fact, it was new for 2012, so I wasn’t even sure collectors had seen the initial Boulevard release before this was available for order. Gary answered with the following comment:

We’d just come out with the casting in one of the Premium lines (Boulevard), and it was met with great acclaim. For whatever reason, whoever the marketing person at the time was chose to pay attention to that.

So that was it. Just when you think your feedback as collectors doesn’t matter, just know that the fine folks at Mattel are always listening. So whoever that marketing person was, “thank you”, as you can see (just by looking at the front grill) how far superior this #RLC Rewards release was to the premium Boulevard cars at the time.

The 1:1 Hudson Hornet is a work of art and this #RLC Rewards release of the Hot Wheels #’52 Hudson Hornet is really no different. Cars from this era are certainly under-appreciated in this day and age of Hot Wheels collecting, so finding premium examples like this can be few and far between while it seems the diecast companies are mostly focusing on the latest trends. This car currently sits in my ’52 Hudson Hornet collection, but it is slowly growing as one of my favorite HWC/RLC cars of the last 10 years. If you don’t have one, you should consider picking one up to see how beautifully-executed this one really was.