Have you seen the new ’41 Willys Gasser that is coming to the Red Line Club in 2019? If not, I have included the pictures of the samples from the RLC party down below, along with the slideshow image of its proposed color/graphics that was shown at the convention finale earlier this month. This casting will be heavy, detailed and embody every facet of where the RLC is headed. I have no doubt that it will be a hit with collectors. 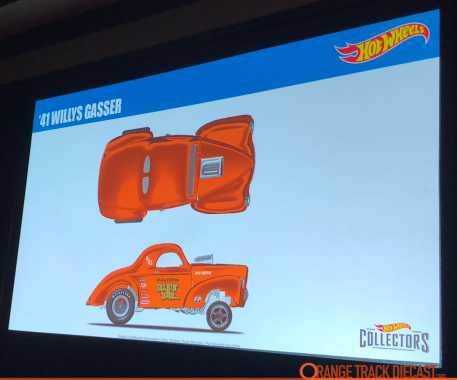 One of those cool releases was the #Custom ’41 Willys Coupe. At the time, it was like my 9th favorite for that year (out of 15), as that was how good the selection was. However, it has slowly gained ground on some of the cars I had previously placed above it. I think the sentiment at the time was similar since there just isn’t a huge following when it comes to Hot Wheels #Willys. I’ll add that, this was one #Treasure Hunt that I had no problems finding — even found it left behind in some cases. Nowadays, one can still easily be had for a couple bucks, so even today, there is minimal demand. 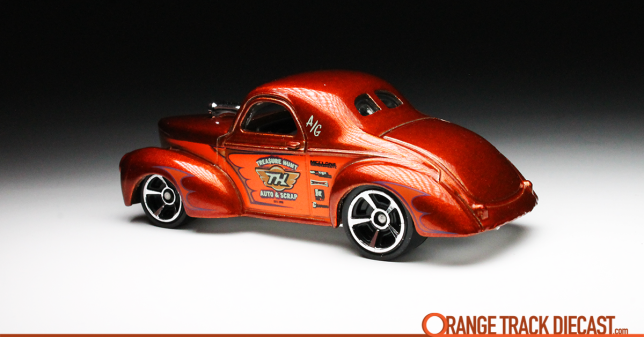 Although the #Larry Wood Designed, #Custom ’41 Willys Coupe made its debut almost 10 years ago, it remains an active casting as it was recently released in the 3rd series of Mystery Models for 2018. Of all of its releases, this one would have to be my favorite, but can you imagine if this would have seen the Super Treasure Hunt treatment? Oh boy…. that would have looked great.

The graphics on this release are a big part as to why its my favorite. I love how the graphic designer worked #Treasure Hunt into the logo on the door. “TREASURE HUNT AUTO & SCRAP” sounds interesting…

Overall, the #2012 Treasure Hunts version of the #Custom ’41 Willys Coupe is a great release that is definitely overlooked and underrated. Will we see an increase in demand when the RLC ’41 Willys Gasser is released? Its entirely possible. Never did I think gasser-fever would spread to a #Willys, but it has and its great for the Hot Wheels brand. So… while you are patiently waiting for the ’41 Willys Gasser to go on sale sometime in 2019, make sure you check out the Custom ’41 Willys Coupe in whatever secondary-market avenue you choose.