What do you think of the new, Hot Wheels #Replica Entertainment / #Marvel series? For me, it was my favorite Replica Entertainment series of the year. We saw three modified “new” tools (#Punisher Van, Deadpool’s Chimichanga Truck & Ghost Rider Charger), one made its retail debut (Spider-Mobile), and then there was the Milano. Milano aside, I made sure to pick up these other four and they are each special in their own way. While OTD will look at each of these over the next few weeks, today’s focus is on the #Punisher Van. This was the one I was most excited for as I’m a sucker for #Post-Apocalyptic Vehicles, especially ones with a machine gun and turret. I know, I know, its not technically a post-apocalyptic vehicle, as its more of a battle van / mobile command center, but hey, if there were a zombie apocalypse, it would be a pretty sweet van to have.

What makes the #Punisher Van so special are those modifications. You don’t see many Hot Wheels vehicles these days with guns or other weaponry on them so when one does come along, it tends to stand out from the crowd. With these weapons, come an increase in parts (as far as the tooling is concerned). I count a total of eight separate pieces (not counting the wheels). The spiked battering ram in the front is sculpted beautifully, as it has a high level of definition. The best part? It extends out — albeit reluctantly. The pivoting machine gun and the turret that extends out from the back, round out the #Moving Parts!

This casting was designed in an asymmetrical sense, in that, the left side is paneled with a huge, black #Punisher logo on it, whereas the right side has the sliding door cast open, revealing a very detailed mobile command center. 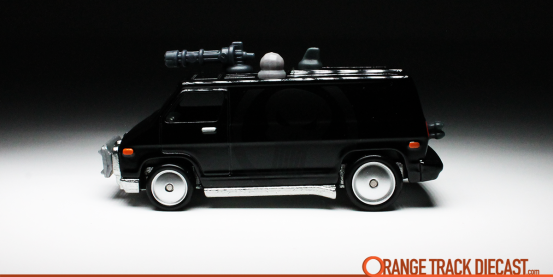 The Hot Wheels #Punisher Van is easily one of my favorite new #2018 Hot Wheels castings. Since it is a #Marvel licensed casting, I don’t think we will be seeing it in any crazy graphics (which is a plus), however the double-edge sword aspect of that, is that we probably won’t see any design that strays away from this one. This vehicle has a little bit of a nostalgic feel to it as well. I think its a cross between it being based on the #Super Van and the fact that it has eight pieces — while we live in an era of 4- to 5-piece Hot Wheels (typically). I have been fortunate to find this one, along with the other cars from this #Marvel #Replica Entertainment series, but you can bet that I will certainly be looking to pick up a few more since it is so cool.

Have you found the #Punisher Van yet? What do you think? Feel free to comment below, and let us know what you think!