Part of the reason why I love Hot Wheels so much is the brand’s ability to capture all types of car culture at the retail price of $1. Take for instance what I have heard typically referred to as #Donk culture. Popular with U.S. inner-city, donks usually originate as a larger sedan, which is then raised up with large wheels (and hopefully the appropriate suspension to boot), and a sound-system to catch your attention if the car’s flashy looks don’t succeed at first. Just like every other culture that revolves around cars, this one revolves around a passion — a passion for being flashy — rather than performance in this case. I’ve had the pleasure of talking to some owners of real donks and they had shared with me what inspired them to build this type of car. One guy said it was all about the ladies, whereas another said it brings out haters at face value (aka: what the are) — haters. These cars are meant to ride high to essentially be on par with the height of your Cadillac Escalades of the world. Donk culture is subject to the negative perception that only drug dealers drive these which is certainly not the case. Those negative perceptions come from the outside looking in, and should not be applied to overgeneralize a whole culture.

Donk culture made a cameo appearance in the Hot Wheels mainline back in the mid-to-late 2000s when dub culture was at its peak. While no new castings were introduced as #Donks, several existing tools were retooled to have bases that supported the larger wheels. The Hot Wheels #Montezooma was one of the first cars to receive the donk treatment, and I have to say that, I loved seeing these in Hot Wheels form.

Hot Wheels Montezooma from the 2006 Hi-Rakers Series (both colorways, head to head view)

Appearing as part of the #2006 Hot Wheels #Hi-Rakers Series — a name that had been trademarked by Mattel for a previous purpose — the #Montezooma sits on some XL #Bling Wheels. Not all of the Hot Wheels #Donks received these wheels but in this collector’s humble opinion, these looked the best on this type of car.

Its sad the #Donks are no longer produced by Hot Wheels as this is a type of car culture that is truly misrepresented and I’m sure there are kids out there that who would love to have a car that looks like their dad’s. This release of the #Montezooma had two color #Variations — commonly referred to as colorways. Both the blue and the green colorways featured what looks to be a tribal flame design. Its an adequate design for this type of car, but it would have been really cool to see something flashier and/or licensed perhaps.

Lets face the fact that there will never be a #Donk series in the Hot Wheels #Car Culture line. Its sad because if there was one line that Hot Wheels does that could really give these cars the detail (and flash!) they deserve, it would that that one — complete with donk #Real Riders and authentic, sponsor-based graphic schemes. I guess, never say never, as U.S. collectors never thought #JDM culture would be what it is today, but it sure seems like this tiny car culture is fading. The donk casting of the #Montezooma was only released one more time after this initial release — which was part of the 2007 Camouflage 5-Pack — before it became a #Discontinued Casting. 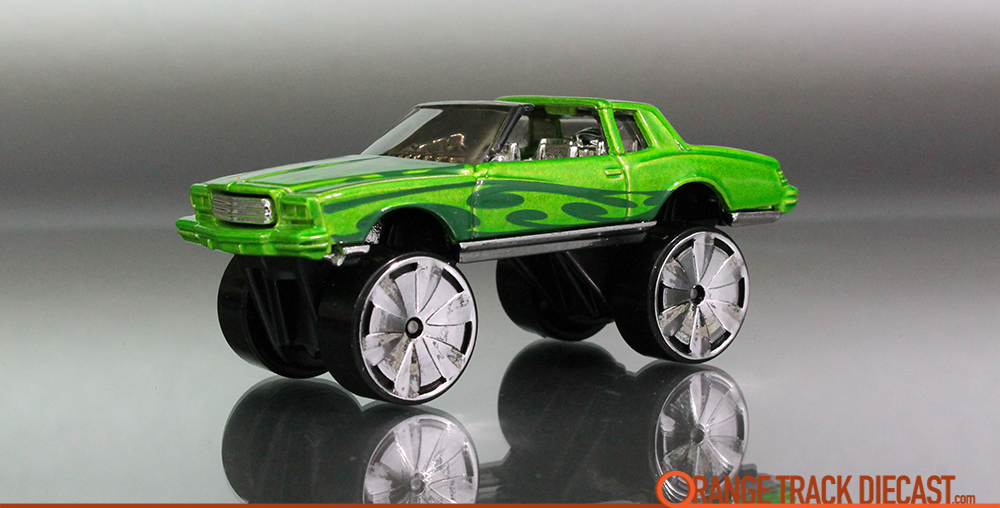