The #Ice Charger from The Fate of the Furious (2017) — or F8 for short — is finally here! While it didn’t quite make it into the Hot Wheels lineup by the April release date of the movie (in theatres), it did start hitting the in United States just this month as part of the #2017 Hot Wheels “M” case assortment, which fell in line with the movie’s DVD/Blu-ray release date of July 11. In true #TV & Movie Car fashion, this heavily-modified ’70s #Dodge #Charger was over-the-top in every way for its on-screen performance, so when it was announced that we would see this car as a #2017 New Model, most collectors wondered how much of that detail would be scaled down to 1/64 scale with it.

Suffice to say, the #Ice Charger casting was in good hands from the beginning as resident Hot Wheels Designer, Brendan Vetuskey also designed the Hot Wheels version of the Off-Road Charger from Furious 7 (2015) which also made its debut as part of the #2017 New Models this year. Brendan had the daunting task of recreating this soon-to-be-loved movie car before anyone had even seen the movie as the car had to be designed from sketches and photos of the movie car that Universal Pictures had sent over.

Considering that the Hot Wheels version of the #Ice Charger had to be designed to be built from four pieces (body, windows, base & interior), Brendan did a remarkable job capturing the essence of this car. From the wide fender stance, to the bullet-proof/riveted windows, to the equipment protruding from the trunk, the $1 (USD) Hot Wheels mainline car has it all. Now, some collectors may point at the equipment in the back as it does tend to have a little bit of a “globby-effet” due to the thickness of the paint, but after seeing the movie, you realize its all there. Most notably, you have the large EMP device on the driver’s side that Dom uses to disable the defenses at the military base he drives into; and the fire cannon (possibly exhaust?) on the passenger side that Dom uses to divert a heat-seeking missile away from his “family”. 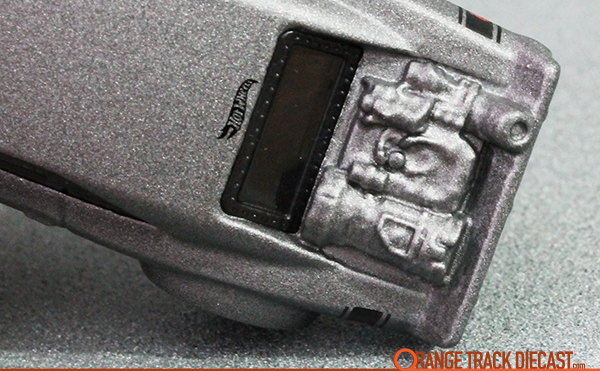 As you can see, the #Ice Charger makes a pretty sweet Hot Wheels car all-together. Collectors that collect the #TV & Movie Cars should love it. As a collector of both #Fast & Furious cars and of ’69 & ’70 #Dodge #Chargers, I of course have to pick up a few. Also, being that it is a licensed movie car, you just never know if you will see the casting again. Chances are, see we have seen lots of Fast & Furious cars be re-released over the years, there will be a wheel change or a slight paint variance — or even a premium release in some cases — but in most cases its safe to assume you won’t be seeing this one wearing any wild & crazy graphics.

As mentioned earlier, this one is in stores now as part of the #2017 Hot Wheels mainline “M” case assortment, in the #HW Screen Time series. As with most #TV & Movie Cars that #First Edition release always tends to fly off of the pegs. Look for this one now as it surely won’t last long.