#Lamborghini and Hot Wheels have had a great relationship for the last decade, as Hot Wheels has produced at least one new Lamborghini casting every year since 2009 — a streak that unfortunately ends this year. However, before you begin to think Lamborghini is going the route of Ferrari, realize that the aforementioned relationship only strengthened since the loss of the Ferrari license in 2015.

Case in point, the new #Lamborghini Series (2017) is celebrating Lamborghini’s 45th Anniversary and will be released at Walmart stores across the United States very soon. Some collectors in Europe have already reported finding these at their retail outlets, but they have yet to hit the masses here in the United States. So how did I get mine you ask? Well, I was fortunate to be on Walmart.com one day and they had a listing for the series — with only 2 left! Ahhhh! So I hurried up, bought the two, had it shipped via “Site-to-Store” so I didn’t have to pay shipping, and I could just pick it up the next time I was at the store. So for $2.14, I got two cars from this assortment, randomly. I have to admit, it was kind of fun not knowing which of the 8 cars in this series would be in that box. Low and behold, they were both this #Lamborghini Sesto Elemento.

Now, I have to admit that I was secretly hoping that the Lamborghini Countach would be in there since it was last released in 2011 (and 1996 before that!), and the novelty of it being used again after all these years was intriguing. Since it wasn’t, I was definitely happy that the #Lamborghini Sesto Elemento was in there since I believe it to be the best car in the series. Its jet black, high gloss finish looks real slick as it almost looks like a black foil with the right lighting. That jet black is highly contrasted with the yellow interior & details, making for a great color-combo. Its really a perfectly clean car, with the only tampo work on rear vents and on the hood (the headlights and the #Lamborghini badge).

I think the #Lamborghini collectors and the other #Exotic car collectors will be excited to find this one. I’m not sure how much more detail it could have past taillights and #Real Riders, but at the retail price of 94¢, this #Walmart Exclusive is quite the bargain. Look for it, and the rest of the 8-car 2017 Lamborghini Series, soon! 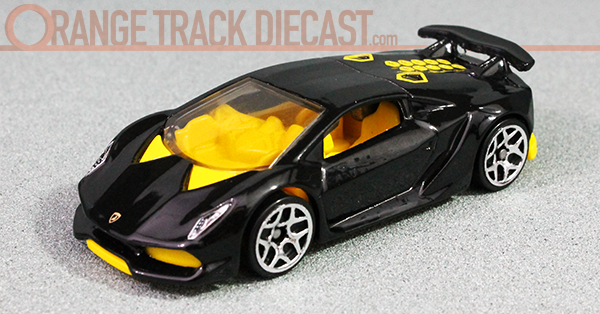