Happy New Year! Over the years, the #Carbonator has become the unofficial Hot Wheels car of the new year. Since 2012, this multi-purpose casting has been used to ring in the new year. From 2012 to 2016 it was a #Chase piece included with the #Walmart Exclusive specialty lines (Cars of the Decades, HW Jukebox & #HW Road Trippin’). This year however, we actually got two releases of the Carbonator! One was included with the Walmart Exclusive, Holiday Hot Rods assortment whereas the second was released in the mainline, in the brand-new #Holiday Racers segment series — a series that includes five vehicles that celebrate: Halloween (’16), Happy Holidays (’16), New Years (’17), Valentine’s Day (’17) and a future holiday. 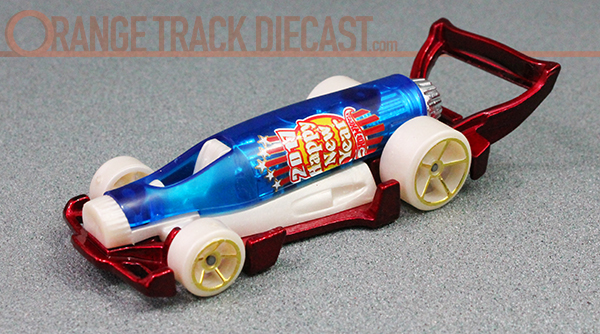 The #Carbonator was the vehicle chosen to represent New Years 2017 since it has been that unofficial car for the last 5 years. As you may already know, this is one of several #Castings with other uses. The large spoiler in the back acts as a bottle opener and the front spoiler can be used to pop the tab on aluminum cans. You can see the icon for this on the base (shown below). This casting was originally introduced as part of the #2008 New Models and has been used multiple times in the mainline and as part of the retailer-specific lines. Its base was retooled beginning with this release (as the front rivet was moved forward) to presumably help strengthen the body/base relationship, helping the body to stay on longer after popping off all those bottle caps!

Hot Wheels Carbonator from the 2017 Holiday Racers series (base)