Sometimes you buy a Hot Wheels release strictly based upon its graphic design execution — I know there are at least a few of you out there. For me, that was the case with this release of the ’12 Camaro ZL-1 from the 2013 HW Showroom / #HW Garage Series. Representing #Team Hot Wheels is this playful design by Hot Wheels graphic designer Jeremy Cox. While this design may look like the colors (in the graphics) were changed from one colorway to the next (as they often do), they actually changed ever-so-slightly as the red #Camaro features Team Hot Wheels Red Team branding while the #ZAMAC Camaro features Team Hot Wheels Blue Team branding. Most noticeably, you can look at the roof of this release for the difference in team branding.

More observant collectors will notice that the graphic design changes go beyond just whats on the roof. The #Skulls you see scattered all over the car are different between the red and the zamac colorways as they fall in line with their Team Hot Wheels team association. I know, it may sound like I may making this into a big ordeal but considering that the graphic design rarely changes between colorways in the mainline, this is kind of unique to only a handful of releases. In addition to that, these #Team Hot Wheels graphics are just cool so kudos to Mr. Cox for designing two real cool colorways of this #Camaro.

Now, I would be remiss not to mention the wheel #Variation on the red colorway. At first, it was reported that the opaque red wheels (shown below) were the harder (of the two) to find, however, when it was all said and done, it seemed as both the opaque and translucent red wheels were in similar supply. 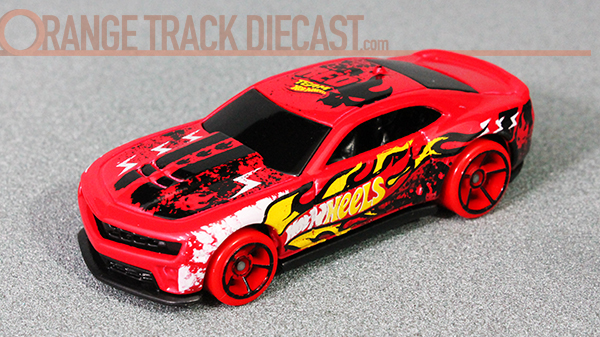 Speaking of translucent wheels, the #ZAMAC colorway had them and there were no reports of anyone finding an opaque blue wheel #Variation so this was the lone variation of the ZAMAC colorway. For some reason, the color of the #Team Hot Wheels graphics looked super sharp against that unpainted metal body. Personally, I probably would have bought more had I found it at retail but it seemed that I wasn’t the only person who was fond of the design as I never did find it when it appeared in the #Walmart Exclusive ZAMAC dump bins. Finding it for a couple bucks on the secondary market (after shipping) can be a challenge so this sweet piece didn’t enter my collection until just last month.