Today is International Talk-Like-A-Pirate Day and we’ve decided to celebrate here at Orange Track Diecast with a #Pirate-themed Hot Wheels vehicle. AVAST — we have the #Anglia Panel Truck from the 2003 Boulevard Buccaneers series. AYE — go grab yer grog and tie up your dingy before you read the rest of ye ol’ article. 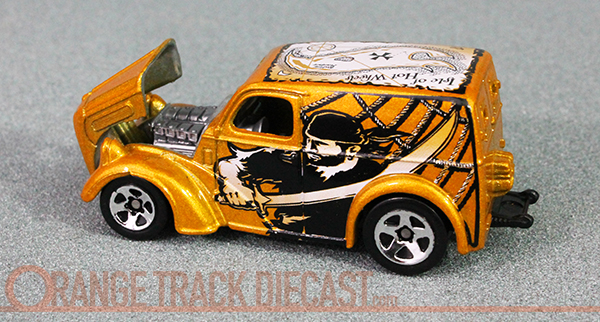 Aye Aye! Welcome back ye scally-wag. What were you doing? Playing yar horn pipe in the bung hole? Blackbeard says, “Smartly, me lass, grab the rope and hold on”.

The #Anglia Panel Truck, a 2000 First Edition, was designed by Phil Riehlman. It seemed as though the Anglia Panel was designed for more mainline use than one of Phil’s other designs, the collector-favorite Volkswagen Drag Bus. Being in that is was smaller, lighter & still featured the paneled sides for extreme graphics use, this made the Anglia very popular initially with the Hot Wheels Graphics Team and more importantly, collectors. Still, to this day, the Anglia Panel is used just about every year in a graphic-heavy segment. While not as popular as it first was in 2000, the Anglia Panel still has a group of collectors that love its drag-racing, graphic real estate toting, front-end flipping coolness. Unfortunately, the latter, the #Opening Hood no longer exists as part of a cost-cutting measure in 2011. Its always sad when a casting such as this loses a feature like that. The casting just loses a little bit of its personality. Fortunately, the Anglia Panel had a lot to give. 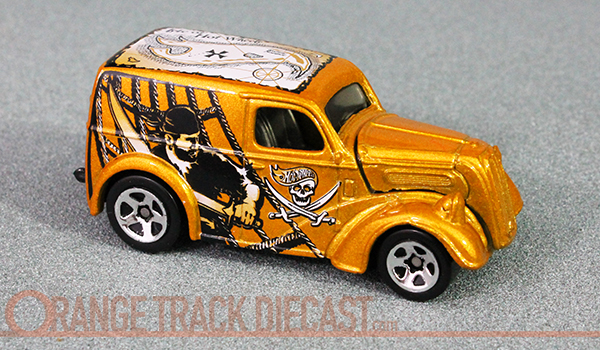 This 2-seat drag racer has parachutes cast onto the closed back doors of the casting as well as a wheelie bar in back that is part of its base.

This gold Anglia Panel from the 2003 Boulevard Buccaneers Series, features a sword-drawn pirate with a beard, bandanna & earring — too bad there’s no eye-patch! There is also a rope-net behind him. Clearly, the most cool graphic on this release however is the Treasure Map laid out on the roof of the vehicle. It features “The Isle of Hot Wheels” in the shape of the Hot Wheels Logo, along with a large “X” where we can only assume the #Treasure Hunts are hidden — Yo-ho-ho and a bottle of rum!

Now, you pilfering scum dog scally-wag, bilge rat, the tide is high so go hunting and let me know if you find the booty! 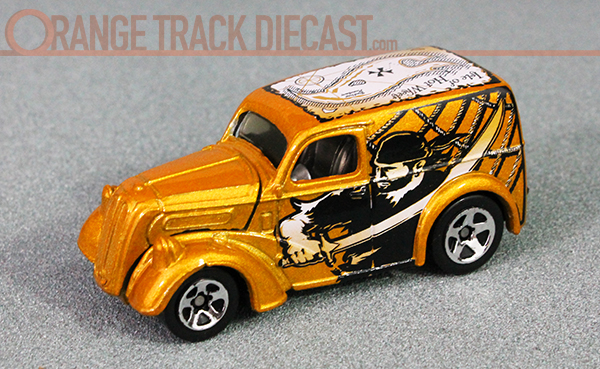