A lot of collectors have been unhappy with the 2016 Treasure Hunts as this hidden series has contained many #Unlicensed Hot Wheels fantasy castings, just like the 2015 installment. As often as someone voices their displeasure with this year’s arrangement, someone almost always comes in with the old Hot Wheels catch-22, “well, these are kids’ toys”.

The Hot Wheels ’11 Corvette Grand Sport is one of two licensed cars included as part of the regular #2016 Treasure Hunts, and possibly the best of the bunch. Its candy apple red paint seems almost spectraflame in nature and its TRAP5 wheels give it an ultra-modern look. The #Flame Logo (TH) does look a little out of place on the doors but at least its not hard to locate. Finding the actual car in stores seemed difficult initially when it was first released in the “B” case assortments at the end of 2015, but as several stores in my area received older case codes in 2016, I was able to come across this hunt fairly often. I’m not sure if other collectors left these behind as the car doesn’t have much worth past $2 on the secondary market, but if you have, thank you as this release looks great racing down the orange track. 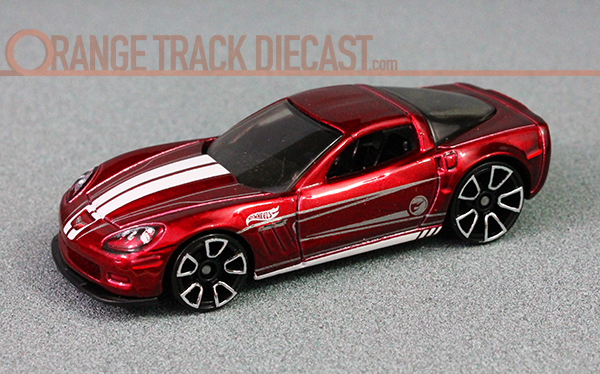