Hot Wheels and real-life racing have gone hand-in-hand since the days on Snake & Mongoose back in the 1970s. In the 1990s it was #Jack Baldwin “Leading the Way” for the Hot Wheels Race Team. His famous ’93 Camaro race car has become a staple of the Hot Wheels line. A similar, lesser known staple is the Olds Aurora GTS-1 he had a share in driving in various endurance races. This #11 Olds Aurora GTS-1 was owned by Robinson Racing and was also driven by Irv Hoerr and George Robinson throughout 1997 & 1998, including a victory at the Sebring 12.

In 1999, Hot Wheels released its brand-new Olds Aurora GTS-1 casting in the authentic #Hot Wheels Race Team paint scheme driven by the trio. This #First Edition of the Olds seemed to be in short supply at the time as it was rumored that it was a limited run before the silver painted version (with generic Hot Wheels graphics) and the red painted version (also with generic Hot Wheels graphics) were implemented. Vehicles with authentic racing schemes always do well at retail and especially in the mainline so it would be of no surprise if these were simply snatched up quickly instead of being of a short run — it only makes sense as you can obtain this 1999 First Edition for a buck or two … 17 years later.

A great, older release that you can get for close to original retail price? Yes, please! 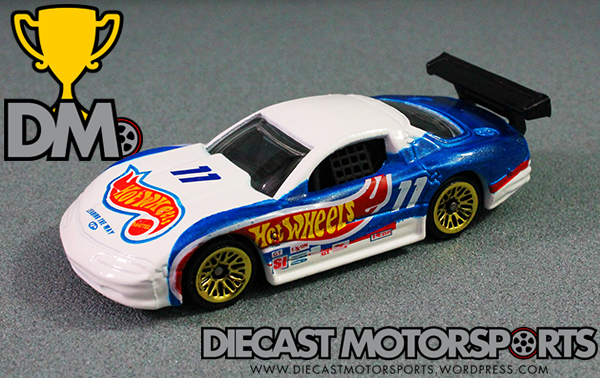 To make it even better, Hot Wheels has released new, more detailed premium versions of this car (in other lines) in 2003 and 2012. In 2003, as part of the Hot Wheels Hall of Fame line / Milestone Moments series, the Olds Aurora GTS-1 casting got its first taste of a premium line. It received more detailed, authentic graphics of that same #11 race car and even featured Robinson’s and Baldwin’s names across the roof (above the driver-side door). Another comparable release was part of the Hot Wheels Racing / 2012 Muscle series. This #12 Hot Wheels Olds Aurora also featured both gentlemens’ names along with a roof tampo for “74 Ranch Resort” — a South Texas Hunting Resort who must have sponsored one of the #Race Cars at some point. These two premium versions will be featured here at Diecast Motorsports in the coming months.

The Hot Wheels Olds Aurora GTS-1 casting was last released in 2012 in that Hot Wheels Racing / 2012 Muscle series. Though its had other releases, none of which look as good as the three #Hot Wheels Race Team versions.