We just couldn’t escape the week without showing you the Hot Wheels 1966 TV Series Batmobile. Its hard to believe but ABC aired the original “Batman” TV Series 50 years ago this week. Sure, we laugh about Batman & Robin running around in leotards throwing Zip! Zang! and Pow! punches, but back then, every little boy wanted to be them. The envy didn’t stop there. Batman had a car — a car unlike anything else! This car had all of Batman’s witty gadgets, technology and was anointed, the Batmobile.

Designed by legendary custom car king, George Barris (who recently passed away on November 5, 2015), the ’66 Batmobile was built from a 1955 Lincoln Futura concept car that George acquired directly from Ford in 1965 for $1. Given the short time-table of three weeks to create the car for the upcoming Batman TV series, George sought out the Futura because of it seemed very bat-esque to him. Suffice to say, the Batmobile was a huge success and we are still obsessed with it today. For more information about the actual 1966 Batmobile, please visit 1966batmobile.com.

The Hot Wheels ’66 TV Series Batmobile debuted in the 2007 New Models and was an instant hit. Collectors flocked to the pegs to find this piece of Americana in Hot Wheels form. There was also a fear that we would never see the ’66 Batmobile in the mainline again. Fortunately, we did see the ’66 Batmobile at retail and in the mainline again. We have also seen it as a premium release at conventions and in the Red Line Club.

The 2007 New Models version of the ’66 Batmobile (shown below) was pretty common. There were two extremely hard to find variations of this release as well. The “smooth grill” variation is exactly that, a smooth grill in front versus the common “honeycomb grill”. There also is a wheel variation as well. Chrome 5-Spoke (5SP) Wheels came standard on this release of the ’66 Batmobile whereas the rare variation came with Chrome 5-Dot Wheels.

If you’re a fan of the ’66 Batmobile casting, you’re in luck! It is now showing up at retail in the Entertainment line’s newest mix. Look for that one now. 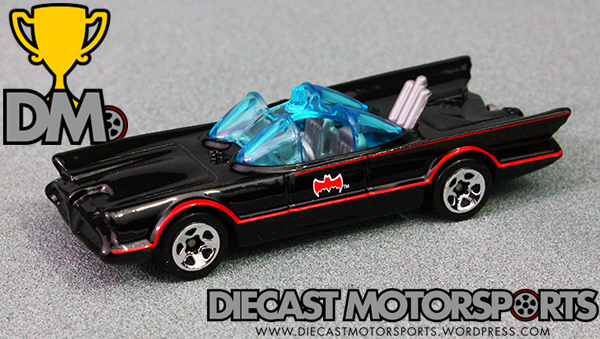