The Fig Rig was a new 2013 Hot Wheel that had collectors talking right away! Released in the HW Stunt / Stunt Circuit Series, this Hot Wheels truck brings a new take on customization. You can literally add on to this truck many Lego or Mega Blocks items—or as it may have been intended, figures. You know, for stunt riding, as the name of the series implies. With a partially-exposed engine, you can add pieces or figures onto the hood. There are another two in the truck, as well as “hand grips” on the roof and spoiler (see below).

Shortly after this casting starting showing up at retailers, Hot Wheels and Mega Blocks announced a lineup for Hot Wheels Mega Blocks products. Every boy and collector alike had waited for the day he or she could use their Legos/Mega Blocks with their Hot Wheels cars—including this collector! Back in the day, I would use Legos to form garages for my Hot Wheels. Legos were also nice to use to build features, such as jumps, along my downhill track.

The Mega Blocks figure in the picture below was released as a 2013 San Diego Comic Con Exclusive. I was able to secure one on eBay for $5.50 shipped. As you can see, he makes a great stunt rider for the Fig Rig. Hot Wheels Mega Blocks are now in stores (in the Mega Blocks section) as well as the Hot Wheels Fig Rig, which is of course in the Hot Wheels section. All 6 versions of the Fig Rig released so far, have been easily attainable. Track down this casting now and let’s build, or race–OR BOTH! 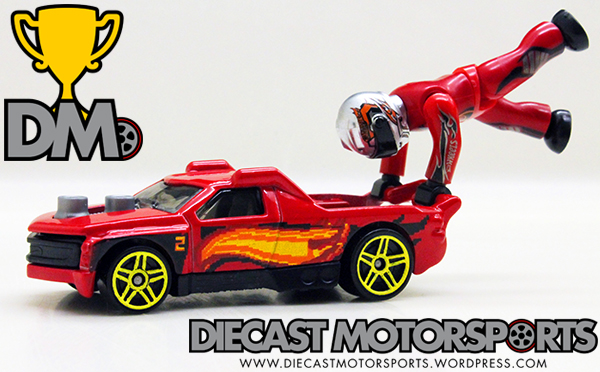