The second car in our #Night Breed Week-long series is the 24/Seven. An unlicensed Hot Wheels casting designed by Dave Weise that takes some strong design cues from a 1990s Mazda RX-7. It is believed the “Seven” in the second-half of the name is a nod to the RX-7. Though the “24” aspect of the name could be a variety of things, most collectors believe the “24” is a nod to the 24 Hours of Le Mans Race. Since this is a drift car and a “car-of-the-night”, my own personal belief is that the “24” refers not to the 24 Hours (of Le Mans), but rather the 24th HOUR–Midnight! On one of the releases, it was stated on the back of the card that the 24/Seven has “Twin night vision cameras shaped like foglights in the front brake inlets” essentially deeming it a racer that comes out at night, making the midnight part of the name seem logical as well as its inclusion in the Night Breed 5-Pack.

The 24/Seven was originally introduced in the 2003 First Editions, quickly followed by a release as part of the Highway 35 World Race line as a member of the Street Breed team. To this day, it continues to be released regularly. Since Hot Wheels does not have a 1990s Mazda RX-7 in its repertoire of castings, many fans of that car are finally catching onto the after-market styling of the 24/Seven. The Night Breed 5-Pack release of this casting offers fans of this casting a Spectrafrost Kelly Green finish that really showcases this casting’s great body lines. 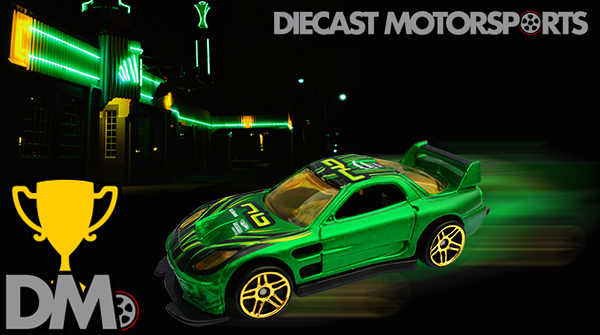