You know that saying, “everything is bigger in Texas”? While that may not be true for everything, Texans do take a general pride in that statement and the notion of it holds true. On Saturday, I was driving through Scottsdale (Ariz.) on the 101 and saw a Ford F-650 “Texas Edition”, that truck is a mini-semi! Generally, in a marketing sense, if a product has “Texas” associated with it, its because marketers want you to associate that product with it being large in size.

The Hot Wheels Texas Drive ‘Em is big in the personality department which of course comes as no surprise since the casting was designed by Mr. Hot Wheels himself, Larry Wood. As an off-road version of a ’70s Ford F-150, the Texas Drive ‘Em is already a collector favorite despite being recently introduced in 2009.

This version of the Texas Drive ‘Em was released in 2014 as part of the General Mills segment of the Pop Culture line. It features a retro Cocoa Puffs cereal paint scheme. While it retailed for $5, it generally sells for $7-10 on the secondary market. While that is good in terms of value for most cars from this line, the Texas Drive ‘Em is a Texas-Sized, cash cow for Hot Wheels and all the other versions of this casting consistently sell over $10–no matter what line they were released in–with the HWC/RLC version selling for close to $100.

The pop-culture version is the most recent and most readily available release of the Texas Drive ‘Em so that contributes the to “low-end” price compared to the other versions of this casting. Also affecting the high-end appeal are the graphics themselves. Most collectors prefer authentic, era-driven detailing versus vehicles looking like a billboard. Still, the Texas Drive ‘Em is incredibly popular with customizers and this release already has the Off-Road Real Riders to boot. So grab yours now while prices are low because, as history for this casting suggests, those are surely to rise when the supply of this version runs out. 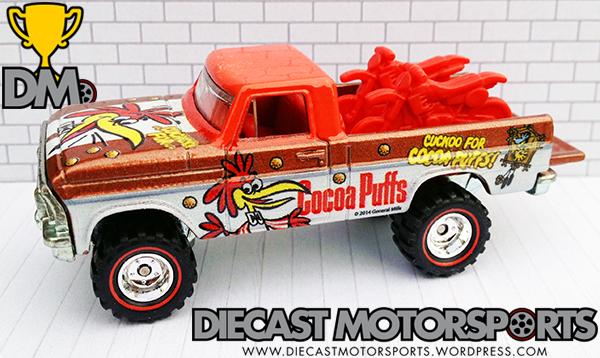